When he was two years old, Cris “Kesz” Valdez’s father forced him to scavenge at a dump site in Cavite City, situated not far from Manila. His father used to beat Kesz and use the money collected for drugs and alcohol. 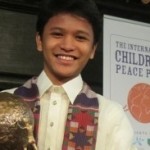 When he turned four, Kesz ran away from home and lived on the streets, continuing to scavenge off a dump site and to sleep in an open tomb in a public cemetery with other kids.

Three years later, he sustained severe burns on his arms, when he fell in a pile of burning tires. He was rescued and cared for by a social worker, Harnin “Bonn” Manalaysay, who has provided for the boy ever since. Kesz is now the founder of the Bible study and outreach group Club 8586.

On his seventh birthday, in 2005, the first one he was celebrating in his entire life, Kesz did not want any presents from himself. Instead, he gave small gifts for street children. Soon afterwards, Kesz, who is now 14, established the charity organization that he has ran ever since, Championing Community Children.

Through his organization, Kesz offers homeless children in Cavite City “HOPE GIFTS,” containing packages with clothes, slippers, toothbrushes and toys. His organization has other programs as well. Kesz organizes teaching sessions for street children about hygiene, food and children’s rights and attends public events, where he represents these kids. In his initiative, Kesz  is supported by his friends, who also help distribute the care packages and teach the street children. Thus far, the young Filipino’s organization has distributed over 5,000 parcels and helped 10,000 street children.

At the end of 2012,  the young Filipino’s work was recognized by the International Children’s Peace Prize, granting him $130,000 prize to invest in his programs. The prize is awarded annually to a child, “whose courageous or otherwise remarkable acts have made a difference in countering problems, which affect children around the world.”

Kesz received his award from Desmond Tutu, the South African activist who won the Nobel Peace Prize in 1984. During a press conference held after the award ceremony, Tutu told the young winner that he is “wonderful.” He also stressed that the young man was a “new voice for the voiceless.”

In his acceptance speech, Kesz encouraged the world to “remember that every day, 6,000 children die from diseases associated with poor sanitation, poor hygiene, and we can do something about it! Please join me in helping street children achieve better health and better lives.”

He also had a personal message for all the children in the world: “[…] our health is our wealth! Being healthy will enable you to play, to think clearly, to get up and go to school and love the people around you in so many ways.”

Kesz, who wants to be a doctor, confesses that he wants to support street children in never losing hope, and to give them the love and affection that he received from his benefactor. In an interview, he revealed:  “This is what I want to give to as many street children as possible… I want children in the streets to get the same chance I had.”