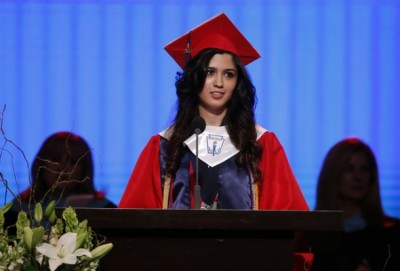 one of the 11 million undocumented immigrants living in the shadows of the United States” high school senior Larissa Martinez announced to her school, and the world, during her high school’s graduation ceremonies earlier this month. Class valedictorian with a 4.95 GPA and a full ride to Yale, Martinez fled Mexico City six years ago with her mother and sister to escape her abusive and alcoholic father, hoping to start a new life in the U.S. Although her mother applied for citizenship within the States, the family was told the process could take up to fifteen years. Sharing a one bedroom apartment with her family while working to assimilate into American culture, Larissa’s journey to graduation has not been an easy endeavor.

Martinez saw her Valedictorian speech as an opportunity to shed some light on the circumstances in which she, and the millions of immigrants like her, find themselves.

“I decided to stand before you today because this might be my only chance to convey the truth to all of you that undocumented immigrants are people too.”

Amidst the ongoing conversation on our nation’s immigration policies, Larissa’s comments come at a poignant time, particularly when strong opponents to amnesty for undocumented immigration now find themselves in the spotlight. Reception to Martinez’s comments has been divisive- some of the nation’s conservatives wonder why an illegal immigrant should be  “getting a scholarship and getting a spot at that school [Yale]”, instead of their own children, as noted by “Fox and Friends” anchor Tucker Carlson in a segment on Martinez aired last Saturday.

Martinez’s speech was met with a standing ovation from students and faculty alike, their cheering and raucous applause reverberating across the auditorium floor. Maybe, with the help of her peers, America can be made, as Martinez puts it, “great again, without the construction of a wall built on hate and prejudice.”