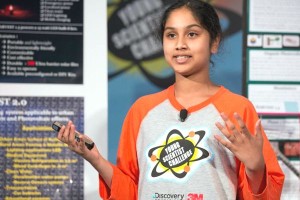 aanasa Mendu is passionate about fixing the energy crisis in the world today. After a trip to India, where Mendu saw a large population of people without electricity or clean water, she became inspired to design an affordable device to generate clean energy. Mendu knew of wind energy’s huge potential. According to the American Wind Energy Association, wind energy potential is 10X the amount of the electricity consumption in the United States. But, Mendu was puzzled by the fact it is currently producing only 4% of America’s energy.

She saw a few issues: high space requirements in urban areas as well as noise pollution. Issues such as these reduce the applicability of wind power to 50% of the United States. At 13 years of age, seeing the problem in front of her, she thought of a solution: piezoelectricity. The piezoelectric effect is the ability of certain materials to generate an electrical charge when applied with mechanical stress. After building several prototypes, Mendu’s third was successful! It generated 9.97 volts and 15.1 milli amperes when wind speeds of 2.5 m/s were applied!

This early device placed Mendu as a finalist in the Young Scientist Challenge. Mendu and nine other finalists participated in a summer mentorship program where she came up with her winning design: HARVEST. This innovative design converts sunlight, wind and rain into renewable energy and costs only $5 to make! The device utilizes “solar leaves” inspired by plants to gather vibration energy.

You can learn more about Mendu’s project in her youtube video below!