When you see a flier for donations for the blind, do you give a few banknotes and then forget about it? Or do dig deeper into their hardships and find a way to make their lives better on a longer term? Shubham Banerjee, a thirteen-year old Californian teen, chose the second option and ended up inventing an alternative Braille printer using Legos. 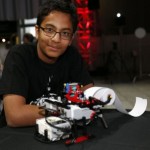 Upon seeing such a flier in December 2013, Shubham became interested in how blind people read. After googling Braille, he discovered that Braille printers existing on the market currently cost around twenty thousand dollars. Feeling that it was unnecessarily expensive for someone already at a disadvantage, he decided to use his favorite toy, Lego, and science to make a Braille printer. His invention prints Braille reading material from personal computer or electronic device on paper using raised dots instead of ink. During our interview, Shubham emphasized: “It started off as an idea and evolved over time. I guess I wanted to help the blind through my own ways.”

He had to build and break seven different models before settling on a final one that was able to print the six dots in a desired sequence according to the Braille standards, after which, he programmed the letters A-Z. The entire process took three weeks of summer, and he spent many long nights working on his printer. The project, called Braigo v1.0, a name that combines Brialle and Lego, was made to show that Shubham’s concept works. He presented Braigo at his school science fair project and then at Synopsis Foundation, where he won the first prize in Physical Sciences in 2014. After his initial success, Shubham launched his own business, called Briago Labs, with three thousand dollar seed funding from his father. Calling his dad his guide, the teen affectionately remembers when they used to sit together at the kitchen table, building his model while his father took work-related calls. “For the couple of weeks , it was very long days for me. I started working on Braigo after I finished my homework and assignments and some days , I was awake till 2 am. But it was all worth it. “

Shubham created a more sophisticated 2.0 version using an off-the-shelf desktop printer and Intel computer chip, a processor aimed at hobbyists, which can translate electronic text into Braille before printing. Shubham does not want the invention all to himself, but for it to be useful for those who need it most. He has put up videos on Youtube on how to make Bragio at home, released the blueprints of his creation on the Internet and detailed directions on how to build Braigo were published in Make Magazine, an American bimonthly publication highlighting ‘do-it-yourself’ projects of diverse nature. Listing the lives of both Steve Jobs and Bill Gates as his inspirations, Shubham has seen his company receive the financial backing of Intel, making the schoolboy one of the youngest entrepreneurs to receive venture capital. He met with the American President Obama when he was invited to the first White House Maker Faire as a Honored Maker in July 2014.

The young inventor also won the Youth Innovator Award 2014 given by Open Silicon in OPEN Forum, one of the largest conferences for entrepreneurs with panels, workshops and discussions on a wide variety of topics important to entrepreneurs and professionals . Citing positive contribution to society as the thing that gives him satisfaction, the eight-grader calls his company an after-school thing. He believes that everything should be as simple as possible, but not simpler, an idea that he and Einstein have in common. His upcoming plans include launching Briago on the market and evolving in life. “Internet connectivity has brought our world closer together, we will see more innovation. But I guess my generation will invent more for social good compared to the previous generations,” says the teen inventor at the end of our interview.

Related stories: How a Nasty Poke in the Eye Made it Possible for the Blind to See;