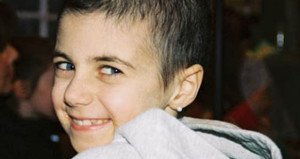 Alexandra Scott was born healthy in 1996 in Manchester, Connecticut. However, when Alex was nine months old, her mother realized that something was wrong with her little girl and started going to a doctor to seek advice and solutions.

When she was four, Alex received a stem cell transplant. At that moment, Alex told her mother that she wanted to open a lemonade stand in her front yard, called Alex’s Lemonade Stand Foundation. She said she wanted to give the money to doctors to allow them to “help other kids, like they helped me.” True to her word, she held her first lemonade stand later that year with the help of her older brother and raised an amazing $2,000 for “her hospital.”  Alex then affirmed that “Selling lemonade is fun. Giving money to the hospital is the best.”

Even though Alex passed away at age eight but the foundation she began with a lemonade stand has raised more than $100 million  to fund  475 childhood cancer research projects at 102 top hospitals and institutions in the US and Canada.   Alex continues to make a lasting impact in the world.

Alex  diagnosed with neuroblastoma, the most common solid tumor outside the brain in infants and children. It is a childhood form of cancer arising in the adrenal gland or in nervous system tissue related to the adrenal gland.  Some of the common symptoms of the disease include protruding eyes and dark circles around them, caused by the cancer spreading behind to the area behind the eyes.  The disease, which can be cured if detected in its early stages, can cause paralysis, by compressing the spinal cord.

Alex spent her first birthday on a surgeon table to remove a cancerous tumor from her spine. The surgical procedure faced a complication and she remained paralyzed from the chest down. The doctors said she would never walk again, but she never lost hope and, with hard work, she learned to walk.

Alex and her family started to work at Alex’s Lemonade Stand Foundation once a month, then once a week, and after that every day. Even if Alex was ill, she worked as much as she could. That was her dream, to help other children who have the same disease.

Alex’s story was picked up by a Sunday newspaper of Philadelphia. That is how her story began to be known by others. More and more people started coming to donate or buy lemonade from her front yard. Her story spread at the national level, as television programs and magazines started covering her story and interviewing her.

Alex’s passion inspired many others. When people heard about Alex’s efforts, they donated the proceeds to Alex’s cause. But also they organized their own lemonade stands in front yards, restaurants, car dealerships, parks to help her achieve her dream.

Before she died, Alex and her family appeared on Oprah Winfrey’s TV program and the Today Show, even if she was hardly able to speak.  She passed away at eight-years-old, but knowing that she  had fulfilled her purpose. With others’ help, before she died, Alex  had raised more than $1 million to find a cure for cancer.

Alex’s parents were proud of their daughter.  Jay Scott, her father, once said: “She was a tough girl. She fought very hard for a long time.”  Her mother emphasized, “She had a lot of faith in research and trying the newest things.”

Alex’s dream did not end, even  after the young changemaker died. The overwhelming support for her mission inspired the family to continue raising money through yearly lemonade stands, and to encourage other kids to join them as well. Alex’s Lemonade Stand Foundation sponsors a national fundraising weekend every June called Lemonade Day. Every year, volunteers  make a difference for children with cancer. Alex’s Lemonade Stand Foundation  became an important non-profit raising funds for cancer research. It is run by her mother and father as Co-Executive Directors.