When Alex Sheen was in his mid-twenties, he lost his father. If there was one thing he admired about the man, it was how he honored commitments. He kept the promises he made. This is what sparked the “Because I Said I Would” movement. It started with just a couple of notes he handed out to those who attended his father’s funeral, urging them to write down a promise they plan to keep. Alex had no way of knowing how fast the movement would grow.

“’Because I Said I Would’ is a social movement dedicated to the betterment of humanity” Alex says. Many people believe the solution to big problems in the world is technological, educational, financial or political. People don’t consider commitments. What would the world be like if everyone kept the promises.

The idea is simple. It starts with promise cards. All that is written on them is “Because I Said I Would.” You write your promise on the card and then give it to someone. When you fulfill that commitment, you get your card back.

These cards are sent to people all over the world, at no cost. At the time of Raluca Besliu’s interview with Alex Sheen, “Because I Said I Would” had sent cards to 82 countries and all 50 states. Today, cards have been sent to 153 countries!

“Because I Said I Would” is a success in many different ways, from the cards mailed and promises kept all over the world to the inspiration it has given others to honor their commitments, promises and trust others to do the same. 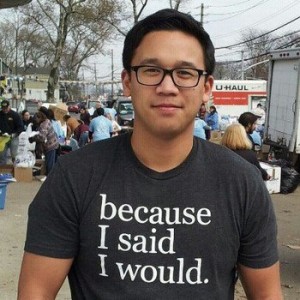 Alex has been featured on CNN, ABC World News with Diane Sawyer, TODAY Show, Good Morning America, NPR, Fox News, Los Angeles Times, CBS Nightly News and many more from magazine covers to the front page of reddit (over 10 times!). Alex himself is not only the founder of the movement but also a speaker. He has given three Ted talks and spoken at almost 100 organizations, with almost 10,000 attendees at each event. What is even more remarkable is he does not do this for money. Alex takes no endorsements or commercial sponsorship.

Alex doesn’t just inspire others to keep their promises, he makes ambitious promises of his own. For example Alex promised; “I will raise $2000 to purchase supplies for families affected by hurricane sandy. I will drive to NY/NJ to deliver this aid. If I cannot raise this money by Nov. 9 I will use my own” and “Kelly, please give these cards to the children, on March 21st I will fly to Las Vegas and personally deliver 20 tickets to Disney land.”

In both instances, Alex not only kept his promise, but went above and beyond. For Hurricane Sandy, he ended up raising $7,000 in 6 days! And instead of 20, he managed to get tickets for 100 children with cancer!

Alex had a simple idea but much of its success comes from dedication. There are 7 Elements of Honor for “Because I Said I Would;” compassion, self-control, sacrifice, honesty, hope, contemplation and accountability. Alex advises other entrepreneurs to know their “why.” He believes that will get them through the challenges on their journey to success.

“When you just, so quickly, and so confidently, answer that question, put your head down and go back to work… I think that’s the most important thing an entrepreneur can do or have, is an answer to that question” Alex says.