A real-life Cinderella: from garbage dump to dancing Swan Lake

Fifteen year-old Jessa Balote has been dubbed Manila Cinderella, given her rise from dire poverty to a professional ballerina in the Philippines.

The young girl comes from Tondo, a slum situated next to a large waste dump in Manila, where most inhabitants survive off of collecting garbage. 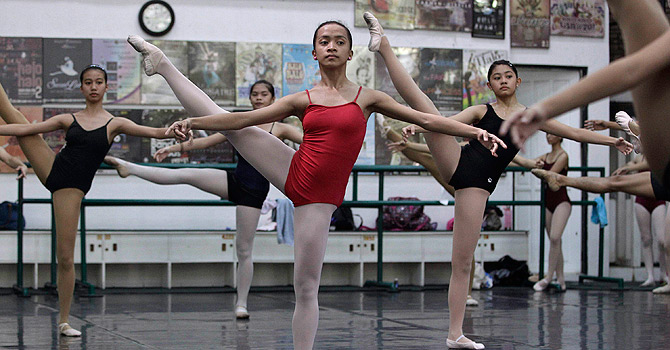 The young ballerina’s parents make money by selling trash.  Apart from collecting garbage, her father also works part-time as a construction worker.  However, the family’s collective income is insufficient to feed its eight members.

Had Jessa not auditioned and obtained the Project Ballet Futures Dance Scholarship in 2008, she would have also been destined for garbage picking.  She recalls: “I used to tag along with my father and mother when they collected garbage in the evening.”

The scholarship was established by Lisa Macuja, the Philippines’ most famous ballerina.  In 1982, at the age of 18, Macuja obtained a scholarship to the prestigious Vaganova Choreographic Institute, now the Academy of Russian Ballet, in Saint Petersburg, where she graduated with honors.

In 2008, the scholarship ensured that Jessa and 40 other students from her charity-run school between six and seven year of dancing training at the Ballet Manila.  This is a dance theater aiming to enhance working class accessibility to the high arts, which was also founded by Macuja.     Ballet Manila has organized performances in malls, schools, town halls and remote villages in the Philippines.

Since receiving the scholarship, the Manila Ballerina has performed in multiple productions, ranging from the Swan Lake, Pinocchio, Don Quixote and even Cinderella.

In August 2012, the Manila Ballerina took part in the 2012 Asian Grand Prix ballet competition for students and young dancers, held in Hong Kong.  She was one of the competition’s finalists.

Jessa recalls feeling intimidated to be competing against some of the most talented of her peers.  What helped her give her best performance during the competition was remembering Macuja’s encouragement “to persist despite the odds and to not let poverty hinder me.”

Jessa is currently an official member of the Ballet Manila. She receives a monthly stipend, meals, ballet outfits as well as a fee for each performance.   In total, the Manila Ballerina makes around $170/month. She uses the money received to support her family.  As she reveals: “I’m the only one they expect to bring the family out of poverty.”

One of Jessa’s main dreams is to become a school teacher while also pursuing her professional ballerina career.