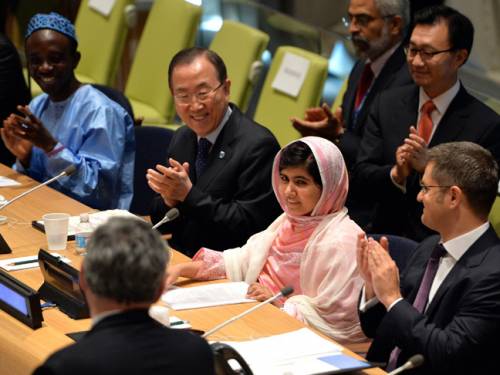 In a powerful and moving speech at the United Nations, Malala Yousafzai called on women and girls not to rely on men to provide them education, but to demand it themselves.  She said,“Malala Day is not my day, today is for… every girl who has stood for her rights.”  Showing signs of a nearly complete […]


Malala Yousafzai will publish a book

Malala Yousafzai, the young Pakistani activist who was shot in the head and neck by the Taliban on the school bus in October 2012, will publish a book, “I am Malala,” in the fall of 2013. The book recounts the shooting as well as her ceaseless and fearless determination, supported by her family, to stand up […]

Malala Yousafzai, the young Pakistani activist who was shot in the head and neck by the Taliban riding to school, has become the youngest person ever nominated for a Nobel Peace Prize. According to Qamar Zaman Kaira, the Pakistani Information Minister, “Malala’s nomination is a great day for all Pakistanis.” He added: “Malala has become […]