Malala Yousafzai, the young Pakistani activist who was shot in the head and neck by the Taliban riding to school, has become the youngest person ever nominated for a Nobel Peace Prize. 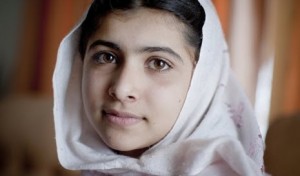 According to Qamar Zaman Kaira, the Pakistani Information Minister, “Malala’s nomination is a great day for all Pakistanis.” He added: “Malala has become an ideology not only in Pakistan but all over the world for women’s right of education.” Experts, such as Kristian Berg Harpviken, the head of the Peace Research Institute of Oslo, suggest that Malala is a favorite to win, because “she embodies several causes: the rights of girls and women, education, youth, and the fight against extremism.”

Others, however, believe that her young age could work against her. Atle Sveen, a historian specializing in the Nobel Peace Prize, emphasized that receiving the award would be too burdensome for Malala, even though her merits may make her worthy of it. He compared the young Pakistani girl’s situation to that of “Linna Ben Mien (a Tunisian blogger who was mentioned as a possible winner in 2011 when she was 27), who almost cracked from nerves when she was nominated.” He also cautioned that winning could render Malala “an even bigger target for fanatic Islamists. So far, the youngest recipient of the Nobel Peace Prize has been Yemeni activist Tawakkol Karman, who was 32 when she awarded the honor in 2011.

Malala already boasts an impressive award list received for her outstanding courage and sacrifice. In 2011, she was the runner-up for the 2011 International Children’s Peace Prize, the first Pakistani girl to ever be nominated for it, and was also granted the first Pakistani National Youth Peace Prize. In 2012, Time magazine selected her as runner-up in this year’s Person of the Year. She was also awarded France’s  2012 Simone de Beauvoir Prize for Women’s Freedom. At the same time, The Times of London named her “Young Person of the Year” for her heroism “not only beyond her years, but almost beyond belief.”

Malala joins this year’s other 258 remarkable Nobel Peace Prize nominees. Nominees include Bradley Manning, proposed for the courage of leaking classified material to WikiLeaks, former US President Bill Clinton for his charitable work, Myanmar’s President Thein Sein, who has led a transition from decades of dictatorship and Russian punk band Pussy Riot, jailed for performing a protest prayer against President Vladimir Putin.

The 259 nominations received this year is a record number. The previous record of 241 nominations was in 2011. Geir Lundestand, the Norwegian Nobel Committee’s non-voting secretary, who announced the number of nominations emphasized: “This year’s nominations come from all over the world … well-known names, well-known presidents and prime ministers and also lesser well-known names working in humanitarian projects, human rights activists.”

He further added: “In recent years, some of the Nobel Peace Prizes may have been controversial but they have added to the interest of the prize.” In 2012, the decision to award the prize to the European Union (EU) for promoting peace and human rights in Europe after World War II was met with skepticism by many, including former Nobel Peace Prize recipients, such South African Archbishop Desmond Tutu, Mairead Maguire of Northern Ireland and Adolfo Perez Esquivel from Argentina, who insisted that the EU should not be given the $1.2 million reward, because its reliance on military forces to ensure security contradicted the prize’s values.

Some experts believe that, this year, the Nobel committee might focus on  rewarding the efforts of Russian opposition members and activists fighting for rights and liberties, since the country is undergoing its worst political crackdown in its post-Soviet history, according to Human Rights First. Harpviken stressed:  “There are a lot of reasons to turn our attention towards Eastern Europe, and particularly Russia. (….) The political developments are very, very worrying and that is something that can’t have escaped the committee members.” Among the top contenders are several Russian women activists, such as Lyudmila Alexeyeva, Svetlana Gannushkina and Lilia Shibanova.

Today, Malala be more concerned with recovery than the possibility of a Nobel Prize. Malala’s father, Ziauddin Yousafzai, said that Malala is “recovering very well, very fast.”  Malala “is the daughter of the whole world” and that “the world owns her.”

Editor’s note:  Check other blogs and videos about Malala on this site by searching “Malala”