While Oliver Murphy did not invent the mobile phone, he certainly has made a contribution to the industry that might make phone insurers nervous about their own business. From Danbury, UK, Murphy is the managing director of Reviveaphone, which sells kits to repair phones that have been submerged in water. 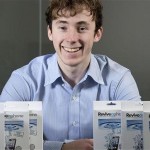 While Reviveaphone offers services for general phone repairs and a spray to make your smart phone water resistant, it is the primary water damaged phone repair kit that has soared him into success.  From his background, it seems like Oliver, only 21 years old, was meant to be a young entrepreneur. He has always liked being his own boss. He started out buying and reselling old phones after he repaired them. It was on a ski trip, however, that Oliver had the idea for how to repair water damaged phones by extracting the mineral deposits from the water, the same methods used on repairing ovens.

With this idea, Reviveaphone took off. Oliver began within the first year that Oliver started the official business he brought in over £20,000. This fact is made more impressive to think that Oliver only started out with £400. Even though the business as booming, Oliver took the next step when he brought his sales pitch to UK show, Dragon’s Den, to hopefully win an investment offer. This opportunity became a huge success when Kelly Hoppen offered a £50,000 investment.
Since then, Reviveaphone has greatly expanded and now has started selling its products in several different countries around the world. This expansion is demonstrated by the £600,000 that Reviveaphone is anticipated to generate this year alone.

Despite the success of the company, Oliver keeps looking forward. Oliver hopes to continue to grow the business by searching for opportunities to sell his products, such as other retailers and airlines on flight. In an interview with The Huffington Post, he said he “would love for Reviveaphone to be a household name” and that his “biggest ambition” would be for Reviveaphone to sell in “as many different countries as possible”.

Still, Oliver has plans beyond Reviveaphone. He is saving his money, and also plans to sell the business in roughly two years to pursue other goals and interests. These include potential website ideas and working in the property sector. No matter what other ventures he pursues, however, he knows that he is content being his own boss and the flexible routine that comes with it.

As for other young entrepreneurs, Oliver has simple, but tried advice. Based on his own experience experiencing negative feedback to his original idea, Oliver told the Huffington Post, “don’t listen to what other people think about your idea”. He continued, saying, “If you want to be successful, you need to be passionate about what you are doing and work really hard at your idea not giving up when you come across problems”. Oliver did pursue is idea despite criticism; and now thousands of mobile phone users in several different countries can benefit from his persistence through Reviveaphone.