In 2010, a severe drought devasted the Eastern part of Kenya, Ethiopia and some parts of of Somalia. It created one of the most severe food security emergencies that humanity had ever seen. In turn, the Western part of Kenya saw a bumper harvest of maize. Some crops rotted in the field, due to an alledged lack of markets,  instead of helping to alleviate the famine faced by the other side of the country. 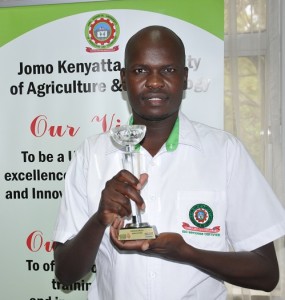 Calvince Okello, a young Kenyan social entrepreneur, decided to ensure proper, reliable and real-time information flow among smallholder famers, traders and other service providers along the agricultural value chain in all parts of the country, by leveraging the use of mobile services. He believed his approach could also help change a practice noticed since childhood: many Kenyan farmers, including his grandmother, only cultivate maize and beans, instead of diversifying their crops each year, by integrating plants, such as sweet potatoes, peas, and passion fruit.

Calvince was aware that the adoption of new farming techniques has always been a big challenge and that it is extremely costly to train farmers through seminars and workshops. As a result, the proponents of these techniques find it challenging to reach most of the smallholder farmers.

He decided that using mobile technology would be the best means to connect farmers, given that, according to the Kenyan Communications Authority, 78 percent of Kenyans have mobile phones. This means that, in any particular household, there is a strong likelihood that someone has a mobile phone. So, in 2011, during his final year at the Jomo Kenyatta University of Agriculture and Technology, he created M-shamba, which in Swahili means mobile farm.

Thus far, the business has reached 6,000 rice farmers and helped them adopt System Rice Intensification (SRI), which increase the productivity of rice crops through an organic labor intensive method using lesser amounts of water than usually required. In 2014, the website also linked over 2,600 farmers to local markets. This year, M-shamba is beginning to work with 25,000 sorghum farmers and 500 mixed crop farmers in Western Kenya.

M-shamba is accessible through an SMS application, USSD, android app and web app. All these platforms are interlinked so that, if a farmer happens to only use SMS, other users on other platforms are able to link with this farmer.

Depending on a given crop of interest, Farm System, one of M-shamba’s key products, is able to guide the farmer in the necessary activities on the farm throughout the crop life cycle, from planting to postharvest handling. The product, which currently generates most of the company’s income, provides an interactive and comprehensive management solution to the farmers based on the farm activities. It enables farmers to keep track of all their revenue, expenditure, and tasks. It also allows urban-based farmers to closely monitor and successfully carry out operations in their farms, which may be based in remote villages.

When the farm produce is ready for sale, the farmer is able to upload the commodity information to Marketplace, M-shamba’s second most important product, via SMS, USSD, mobile app or web. The farmer is able to query for that commodity price in any location so that it is easier for the farmer to know of the current market prices, while also being able to find out the highest price of the commodity, its lowest price and the average market price. Traders are also able to get in touch directly with the farmers.

While currently basking in his success, the young entrepreneur feels that one of his greatest challenges has been meeting the needs of all the farmers, who are calling on him to expand in their regions. He hasn’t been able to reach them at the pace that he would like to due to resource constraints.

Calvince’s greatest accomplishment thus far has been helping to create jobs and improve farm commodity production, which has led to increasing agricultural-produced income. He intends to expand M-shamba’s reach to five million farmers by the year 2020.

He is also in talks with various organizations working with farmers to partner with M-shamba in creating a breed of farmers who would do farming professionally. The young entrepreneur is convinced that, by the end of 2016, his company will reach at least 500,000 farmers. Eventually, his goal is to make M-shamba a one-stop-shop that makes farming enterprising and rewarding.

Calvince confesses that he would love to see more youth take up on farming and more women gain decent income from farming. He wants to be part of a system bringing economic empowerment to rural Africans, by providing them access to relevant information, economic opportunities and enable them to adequately utilize available resources. He believes that there are many opportunities for changemakers to effect change in Africa, if they step out of their comfort zones with a heart filled with love for humanity.

Calvince likes to keep himself busy. Apart from running Mshamba, he has developed Smart Schule, a comprehensive school management helping schools enter the digital age, while reducing the use of paper in schools. The system is web-based and integrated with mobile phone technology for easy and reliable interaction between parents and the school management.

When advising other young changemakers to follow in his footsteps, Calvince emphasized: “They should be resilient. It is not easy walking this path, unless one is passionate and dedicated.”