ZigZag through Romania is a project that was established two years ago and consists of fourteen people from Iasi, Romania with an average age of 24-25. Their goal is to travel all the 41 districts of Romania during the next 4-5 years. The group will stay for minimally one month in each district, focusing on discovering and promoting the most outstandingly beautiful places of their country and most remarkable and successful people from all walks of life and fields of activity. 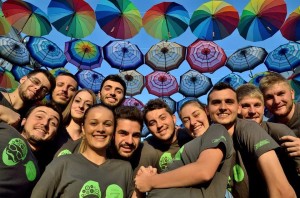 While traveling, they record local people’s stories, either by writing them or by taking video interviews.  The team is divided into smaller groups in charge of interviews, photos and video recording, sales, IT and web design, account and legal. They post daily on their website, while also marketing their initiative online and striving to edit a book for each district and create child books with the stories that they are discovering.

At the same time, for each district, they create a short hyper lapse video. Each month, they organize an education event in one of the cities of the district that they are visiting to inform locals about the touristic potential of their district.

They have just started traveling in August 2014, but have already covered multiple districts in the Moldavian part of Romania, including Botosani, Suceava, Maramures and Satu Mare. Their website is full of amazing stories, including  that of a business woman, Andra Ojog, who creates ecologic toys made of wood, and that of  a painter, the first 3-D painter on asphalt in Romania and the first 3D painter on canvas.

When starting their initiative, the team faced multiple challenges that needed to be solved. During our interview, they mentioned that they always solve their problems, whether they be financial, logistical or internal, collectively, by discussing with one another.

The group supports itself financially, though it often benefits from tourist agencies as well, with funds coming from their promotional services of sale, marketing, multimedia, and educational material.

Many of the people whom they have interacted with are delighted with their idea.  The team believes that traveling will have a huge impact on their personal development, by helping them to become better people, acquire new skills, be more competitive and stronger as well as on on the Romanian population, education and tourism, while representing also a source of inspiration for future projects promoting Romania’s development.

The ZigZag team advised young people who want to follow their footsteps, by emphasizing that “they should just start doing it in a wisenot a defiant one. We prepared ourself for two years, developing skills that can help us to support alone financially. We have been reading and we have been informing ourselves all the time on various topics, including how to maintain good physical health habits. All the aspects are important when you have to travel a long time. And finally we invite them to have the courage to do whatever they are dreaming of. The courage is to have genius, strength and magic.’’