The 14-year-old Romanian writer, Irina Novac, recently published her first book, “A Moment as an Eternity.” 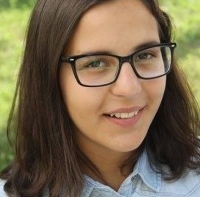 About love, crime, and drama, her novel takes place in the U.S. for the first half and Romania for the latter.

The story centers on two high-school sweethearts, Angela and Chuck. At their prom, Chuck proposes to Angela and she accepts. The moment of romance quickly devolves into tragedy, however, when Angela is murdered by her jealous best friend, Demi.

Bereaved by Angela’s death, Chuck stages a setup for Demi until she finally confesses and is imprisoned. To excite readers about the coming sequel, Irina ends the story as a mystery.

Irina is an 8th-grade student at Emil Botta Theoretical High School, Adjud, a small town in Romania. She began both acting and writing when she was 12 because she often had time alone at home while her parents worked. The young writer told us that she likes to combine her passions: “I pretended to be Angela in the scene in which she dies in [Chuck’s] arms.”

Irina’s father pledged his support for her aspirations even before she began writing, though he considered them frivolous. A couple of years ago, Irina mentioned to her father that she had decided to write a book. Although he laughed at first, he made a promise: “If you write a book, I promise that I will help you with everything that you will need to publish it.” At that time, Irina explained, she already had clear ideas for her novel and did not want her rich imagination to go to waste. After writing for a year and a half, she told him, “I kept my part of the deal, now it’s your turn!”

During her free time, Irina likes to act, and play handball and football; her football team is the national champion. Irina also enjoys writing screenplays and would like to direct her own short films. Although she is very busy with those activities, Irina would also like to become involved in more volunteer activities. In the future, Irina would like to attend the Film Academy in New York City.

Irina thinks that if you want to succeed you have to really want it. Her motto in life is a quote from Paulo Coelho: “If you truly want something, all the universe is conspiring to fulfill your dream.”