Xander Gieryn is a 22-year-old from Wisconsin, living in Indianapolis, IN for the past four years. He describes himself as a service worker, concerned citizen, neighbor and student focused on building strong community relationships, in order to create a more sustainable way of living. He believes in bringing people together “through place-making, creating spaces 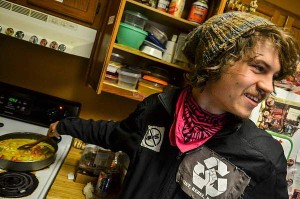 Alongside a roommate, who had experienced food insecurity, and with the support of friends and neighbors, Xander initiated Food Not Bombs-Indianapolis (FNBIndy), an autonomous chapter of a global network, which is a horizontal gathering of individuals interested in creating change and enjoying the security and solidarity of community. In its third wave in Indianapolis (1st ’96-’98 and 2nd ’04-’05), FNB focuses on reclaiming food and redistributing it through two free community meals per week, in order to create community conversation and action through music, art and food.  (virtual and physical) that are hubs for doers, makers and community-builders and convening safe space for discourse and action against oppression and for justice through music, art and food.”

FNBIndy is addressing two crucial social problems, hunger and lack of access to nutritious food for certain parts of the population, while creating a platform for people to propose projects, take on leadership and solve social issues. For Xander, it has been remarkable to see some of his friends, one of whom was homeless when they first met, gain housing, food security, and become empowered to better their situation through FNBIndy. He confesses that his own diet and nutrition has improved, since, as a low-wage earner and student, he typically couldn’t afford the vegetables and produce needed for a balanced diet, but that, by learning how to cook and grow food, he not only eats well, but is able to feed those around him. One of his current biggest accomplishments is organizing over 90 community meals with FNBIndy and hosting over a dozen events in the year and a quarter since the organization has been active in Indianapolis.

Xander is also part of a psychedelic afro-beat band funk/rock/dance band, Sweet Poison Victim (SPV), named after a Ghanaian tradition of sharing a drink called Sweet Poison, which aims to unite the local community in song and dance. SPV was started by Kwesi Brown, who is originally from Ghana, but came to the U.S. to get a master’s degree in ethnomusicology. Kwesi grew up torn between the Christian faith and the traditional religion of his ancestors. His grandmother is a traditional priestess and his father was a Christian preacher. Kwesi became interested in music through worshiping at his grandmother’s shrine and gradually developed his musical taste, which he currently expresses through SPV. Xander currently plays the trumpet in SPV and is proud to be part of the band.

Apart from FNBIndy and SVP, Xander is also active in a worker-owned cooperative to educate the public on communication strategies for a community-driven media, to facilitate asset-sharing between artists, socially-conscious non-profits and organizations, and to distribute and produce creative content for these groups. He is also active in Indianapolis Moral Monday Movement, based off of North Carolina’s Moral Monday strategy. Launched by Rev. Barber, the Movement aims to defend voter rights, especially for people of color, women, immigrants and the elderly, as well as to promote progressive policies, while fighting back against increasing efforts to destroy worker’s and women’s rights.

Xander’s passion for social change was first sparked by growing up in a progressive household, as his father worked for environmental non-profits. Nevertheless, he emphasized: “While the seed may have been planted then, my father’s totalitarian upbringing and my powerlessness to change an emotionally-abusive atmosphere for my younger brother was what allowed me to develop my understanding of power and privilege – especially as I came to realize that even white and “middle-class” left me no real security; when my father lost his job, my family lost their home and I dropped out of school to become financially independent.”

Xander became convinced that the only way to achieve personal and collective security as well as social change was building meaningful relationships based on mutual aid.  He learned this best, during the 2011 Wisconsin Uprising, when over 200k rallied to the state house on multiple weekends during a 2-month period, “culminating in a two-week occupation of the state house, in order to stave off draconian state policies that was forcing people to mortgage their homes and was part of the economic austerity that forced his family to move out of the state.” He was inspired by how the community “built a new society in the shell of the old, providing free health-care, day-care, food and other resources for all of the occupants and organizing the entire endeavor through direct democracy and consensus decision-making.”

He further stressed: “Relationships are the driving force of any social movement or change, and it is by forming deep relationships out of love, respect, mutual aid and solidarity that we will educate, agitate and organize our society into a more egalitarian and sustainable world.” He believes that “we realize our lives are intrinsically connected to the lives of those around us, it’s easy to see that if we make sure everyone in our vicinity is cared for, we’ll be cared for too.” In this vein, the young changemaker would like to see more people step out of the isolation that he believe society encourages and realize how it is possible to have security and comfort if everyone in society works together to take direction action to solve common needs.

The young changemaker is convinced that every individual, through his relationships and existence, can help lay the crucial groundwork needed to take advantage when opportunities for sweeping social change arise. Any action matters, from starting a relationship and sharing meals with someone you normally wouldn’t to launching a community garden.

One of the practical ways through which Xander is applying his vision and bringing social change is by living in a housing co-operative, called No Limits Housing Co-op, with eight other people. According to Xander, a housing co-operative is a form of group-ownership and also a way of living in an intentional community that models and seeks to exemplify co-operative living practices and permaculture, or, simply put, living in harmony with one another and the land around us. While there are growing numbers of housing co-ops nationwide, his is one of the few in Indianapolis and Indiana in general.

Xander and his housemates reduce the food costs, by buying in bulk together, and make other important house decisions in weekly meetings aimed at building consensus on how to ideally live as a community. The housing co-op houses skill-shares and cultural programming for the general public as well. Xander’s first experience living in a co-op was in Madison, WI, where he learned cooking and eating with huge groups of people.

With such emotionally-demanding work, Xander finds it sometimes hard to practice good self-care and not over-invest himself. He is working on it though, as he has realized that taking time to care for oneself is the first step toward supporting anyone else. Some of his long-term goals include sustaining himself and his community by following his vocations, being a positive force in the lives of others, having no boss, but having security.

When giving advice to other young changemakers, Xander stresses: “Don’t water down the message, people will see the value in what you do if you persevere and show consistency and dedication. FNBindy only succeeded because it showed up rain or shine every single Saturday, and now Saturdays and Sundays. The best suggestion ever given to me as young person was to always carry a little notepad to record the umpteen random social infrastructure thoughts I’m sure to have each evening.”