Although Nick Rubin does not meet the age requirement to cast a vote, he’s still found a way to express his voice. He’s only 16 years old, but he thinks it’s important for kids his age to care about the political system they are growing up in. This system, that these same kids will someday be forced to deal with, certainly has it’s issues, including (but not limited to) the undue influence of money on Congress members.

Ever since a 7th grade report on corporate personhood, Nick has been interested in this issue. He taught himself how to code, then using information provided by Opensecrets.org, a nonpartisan, nonprofit research tracking group, he devised a browser extension called Greenhouse. Once installed, the plug-in highlights Congress members’ names in any article or webpage around the web.  The user can then simply roll their mouse over the highlighted name and a scorecard will pop up, showing the politician’s home state, political affiliations, and total campaign donations separated by industry and by size of donations.

Outside interest groups spent $457 million on Senate and House races in 2012, so it’s helpful to see who received all this money and from whom; because it could influence the way they vote. Candidates are more likely to vote in the interest of their top contributors, and Rubin’s invention proves that. For example, while reading about a recently passed farm bill, you might learn from your Greenhouse pop-up that the chairwoman of the Senate Committee on Agriculture received over $300,000 from companies and individuals from crop production industries. Or, you might be reading that Representative John Boehner is doing everything in his power to repeal President Obama’s “awful” Affordable Care Act, then scroll over his name and learn that he’s received over half a million dollars from health professionals. So now you can wonder if the real reason Boehner opposes ObamaCare is because his sponsors don’t like the provisions that would be damaging to them, like taxing the most expensive insurance plans.

Nick thinks questions like this are important, so he developed Greenhouse to make the information easily accessible, simple, and right where people need it. The application has already been downloaded over 50,000 times, and he’s been receiving media attention from VICE Magazine, The Washington Post, and celebrities like Mia Farrow and Marcia Cross. 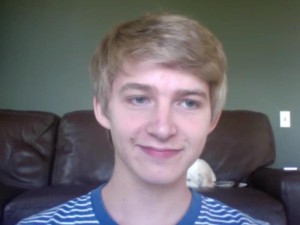 Nick is still being blown away by its amazing response, and is getting used to spending most of his time improving the project. He told Taking On the Giant that one day he hopes to supply even more data to users, like showing how efficient Congress members are, or what bills they choose to sponsor. He is also going to focus on evolving Greenhouse into an interactive community, instead of an extension that simply provides information. However, his main goal for the app is to educate people so they start paying attention, as that’s the first step to a solution.  After all, as Greenhouse’s official website states, “The United States of America was founded to serve individuals, not big interests or big industries.”

Learn more about it and download the extension here!