Sara Policastro is a freshman at George Washington University, pursuing a degree in Human Services and English. 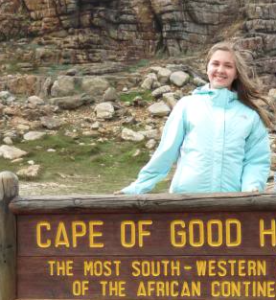 She is also one of the founders of the Student Center for African Research and Resolutions (SCARR). Sara is currently the Director of Operations of this student-led and run think tank that creates innovative solutions for solving some of the persistent problems of Sub-Saharan Africa. Through article writing, blogging, and communications via social media, SCARR strives to encourage youth to use their voice to shape the discourse surrounding current events and African research today.

SCARR started in February 2014 at the initiative of Charlotte Dreizen, currently the organization’s president. Alongside five other members, Sara and Charlotte launched SCARR, with the goal of drawing from each member’s interests in the region and creating a space for them to discuss and write not as students in a classroom, but as members of a larger global community.

According to Charlotte, the reason why it is crucial for students to become involved in writing about sub-Saharan Africa and in promoting solutions for that part of the world is the fact that this region of the world will experience more change in the next fifty years than any other region in the world. She argues that not only climate change will have a more aggressive impact on the region, but population growth and urbanization will most likely remain the highest in the world. She stresses: “Students must be included and prioritized in the solutions to these issues. The previous generation has given us the status quo, for better or for worse. Young leaders and students will be the catalysts to alter the current reality. The students of SCARR are one such example of young leaders making a platform for ourselves to speak up and ignite the process.”

SCARR is not affiliated with any particular university, as all Washington DC students are welcome to share their ideas and be a part of what we do.

The nonprofit publishes solution-oriented articles, as its members believe that too many of the solutions proposed for Sub-Saharan Africa in the past have failed, and creating new policy requires engaging bright new minds. According to Sara, writing solution-oriented articles is a key practice for all emerging young leaders. She stresses: “Everyone can point out the problem, but only a true leader can propose a realistic solution. We hope to propose solutions that engage the political realm, that are read by the people with the direct political power to create change, and provide new ideas that haven’t yet been considered.”

SCARR uses a three-pronged approach to editing, in order to review articles. Before release, all articles will have gone through two editors, with one having been the Chief Editor, and then back to the author for their final approval. The organization has been able to produce a rich variety of articles and blogs on a diverse range of countries and topics from Boko Haram in Nigeria, Desertification, and PTSD in Liberia just to name a few.

While still in its beginnings as

an organization, SCARR has evolved tremendously. Within months, it went from being a group of college students interested in Sub-Saharan Africa to an interdisplinary staff with four teams. These teams allow undergraduate and graduate students from universities in Washington D.C. to work together in the fields of Scholarship, Communications, Administration and Editing with other students while simultaneously gaining experience in the professional world. In order to ensure an interdisciplinary and active approach to problem-solving and brainstorming, the staff participates in face-to-face weekly meetings where teams are able to meet and talk about current events, creative ideas, and facilitate discussion.

The organization has already received praise for it blogs, podcasts and articles from organizations in Africa and the US. Charlotte reveals: “Representatives from the Youth African Leadership Initiative and the Presidents of Music Unites Africa and the Federation of African Youth, to name a few, have reached out to express their appreciation for the publications and work SCARR has done so far.” SCARR directors have been guest speakers in classes at The George Washington University several times, and have made positive connections with other African Research non-profits. The nonprofit aims to continue expanding into academia and hopes for their researchers to be published in academic journals and alternate online blogs by the end of the year.

While enjoying their accomplishments, the members of SCARR are also facing some challenges. One of them is helping students organize themselves and understanding their responsibilities as leaders within the organizations, as many of them have other obligations to their school work, jobs, internships and more. Sara stresses that she has taken this challenge on full force and that, by adopting different strategies, she is managing to increase the accountability of SCARR’s members.

Regarding goals, Sara hopes that SCARR will continue to develop into a network of students interested in challenging themselves, their peers, and the status quo for policy creation. Next year, the organization aspires to obtain the nonprofit 501c(3) status. In the long run, SCARR intends to expand, by opening up sister branches in other cities, to continue to play an integral role in shaping strong young leaders.

When advising other young people interested in bringing positive change in their societies, Sara emphasized: “What I want young people to know is that ideas matter. Their ideas matter. Everything that ever became great started as a spark, as a light bulb that went off in someone’s head. Having an idea is the first step in creating positive change. (…) I would tell other young people hoping to create change in their communities to embracing their ideas, and to voice them full heartedly.”

If interested in learning more about SCARR, check out their page: http://www.scarrdc.org/