When he was 9-years-old, Dylan Mahalingam founded Lil’MDGs, an international development organization aiming to leverage the power of the Internet and social media to educate, engage, inspire and empower children and young people from across the world to work together to advance the United Nations (UN) Millennium Development Goals (MDGs). The MDGs were eight international development goals set in 2000, aim to meet the needs of the world’s poorest by 2015. 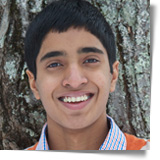 Through his organization, Dylan, who is currently 18 years-old, managed to mobilize tens of thousands of children from 40 states across the U.S. and 43 countries to raise more than $780,000 for tsunami relief and over $10 million for hurricane relief. Through their combined effort, these young people have managed to make a tangible difference in the lives of over one million people worldwide. His organization has also raised funds and resources to build a dormitory for a school in Tibet, a computer center, library, and a mobile hospital in India, while also providing school supplies for students in many countries and creating a playground for a school serving HIV/AIDS orphans in Uganda.

According to Dylan, since being created in 2004, his organization has focused on “transforming entire communities in sustainable ways, and our work has the ability to have a positive impact on both the current and future generations. Our work sets the foundation for children in each community we work with, but we also present the opportunity for every child to be born into the community to become beneficiaries of our work, so our work is not frozen in time.”

Apart from running Lil’MDGs, Dylan is also a youth speaker for the UN as well as a panelist and presenter for the UN Global Forum on ICT & Development, traveling domestically and internationally to spread the message of Lil’MDGs. The young changemaker is also the Chief Strategist and Project Ambassador for Under the Acacia (undertheacacia.org), a non-profit organization working on projects in Africa. In this capacity, Dylan is part of an international team that helped build two schools for remote Maasai communities in Kenya.

In an interview, Dylan confessed that building the Loita Academy, a primary school in Kenya providing free education to all its students, with Under the Acacia is one of his greatest accomplishments to date. The school has three classrooms. In 2011, Dylan and his team mates managed to add a clinic on the school property, which in students pay $3 USD per student each term as medical insurance. The clinic is open to the entire community for fee-based visits. According to the young changemaker, the Loita Hills Academy is a ‘huge success story that can serve as a model program for other communities to emulate, […] because the community has taken advantage of the resources offered to them to become sustainable.’

Dylan has also designed and run multiple websites aimed at raising children and youth’s awareness about important social and environmental topics, such as protecting the coral reef and preventing animal cruelty. One of these initiatives, called “Green Your Lives,” was dedicated to educating students and school communities to advocate for a greener lifestyle choices, which would result in a reduction of energy costs and carbon emissions.

For his many accomplishments, the young changemaker has received numerous national and international accolades. In 2007, he was recognized by Teen People’s Magazine as one of the ’20 teens who will change the world,’ while in 2012, the Huffington Post named him one of the ’25 most powerful and influential young people in the world.’ Dylan has also been acknowledged by Desmond Tutu, the Dalai Lama and three U.S. Presidents.

At the same time, in 2009, Lil’MDGs was recognized by the UN for its best practice in e-content and technological creativity, demonstrating young people’s potential to create outstanding digital content and serving as a platform for people from all UN member states to work together to meet the MDGs.

When giving advice to other young people willing to follow in his footsteps, Dylan emphasized: ‘In my limited experience what I have observed is that it is important for us to be sure that the project that we are working on is something we are truly passionate about. It is hard to stay committed to a project that does not interest you, so I would suggest that anyone interested in starting a new project or their own charity to first dabble. By dabbling I mean that they work on the project for a few weeks or a few months to see if they are excited enough to sacrifice their leisure time for it or get up early in the morning to support the project. If not, they should find another interest and try the same until they identify a cause that truly excites them. Before starting their own charity, I would also suggest that they join an existing charity to test the waters and learn the skills they need to be successful with their work.’