Starting at the age of 13, Surbhi Sarna experienced such intense abdominal pain that she would faint. The pain was sharp; it felt like being stabbed with a knife, whose handle was constantly being twisted. 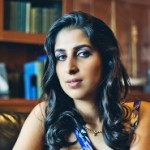 Doctors first assumed Surbhi’s pain was appendicitis, then they presumed it might be ovarian cancer. The only way to determine if the latter supposition was true was to conduct an invasive surgery, which could have caused the cancerous cells to spread and threatened fertility.

It was only six months later that she was diagnosed with complex ovarian cysts. The doctors, however, where still unable to tell her if they were malign or benign, even though the she underwent numerous blood tests and ultrasounds.

After three years of struggling with the pain, Surbhi was put on birth control medication that helped regulate the cysts, which eventually disappeared. By that time, she already knew that she wanted to create her own company dedicated to improving women’s health, in order to ensure that no one has to go through such a trying experience like hers.

In 2012, at the age of 26, she created a company called nVision, a venture-backed medical device company dedicated to filling the void in female health-related innovation. The company’s current focuses are reproductive health and early detection of ovarian cancer. nVision is now in the process of creating an early and quick detection technology so the test is similar to a pap-smear, which would provide a way to collect cells from women’s ovaries and determine if they are cancerous without having to do invasive surgery. While 90 to 95 percent of ovarian cancers can be treated if detected early on, this form of cancer remains one of the most lethal ones when it is discovered in the later stages.

Surbhi’s company is also developing a microendoscope, a tiny camera, to detect infertility, by entering trans-vaginally and examining the fallopian tubes for blockage. The typical procedure for examining the tubes is hysterosalpingogram, an X-ray test that causes discomfort for some, is expensive and requires seeing specialists. The young entrepreneur’s product would not only be less expensive, but it could also be used by a typical gynecologist, not a specialist.

The young entrepreneur aims to obtain the U.S. Food and Drug Administration approvals for both products by mid-2015.

Her company has managed to raise $4.5 million from Catalyst Health Ventures, Draper Associates and Astia and is among 10 companies receiving technical support from Fogarty Institute in Mountain View.

One of her long-term goals includes creating apps that complement each of her devices, so that women can have instant access to data and images from their producers, which are currently only kept by hospitals and doctors’ offices. She ultimately aims to empower women to talk about their conditions and stop suffering silently.

In recognition of her work, Surbhi has been selected by Forbes Magazine as one of its ‘30 under 30’ in the fields of science and health care. Feeling honored by the distinction, she hopes that her efforts to improve women’s health will help save many lives.