Noorjahan Akbar is a 22-year-old Afghani woman, who is the co-founder of Young Women for Change (YWC). The organization, started in 2011, was dedicated to advocating for rights of Afghan women at a national and international level and mobilizing men and women to speak up for the human rights of women. 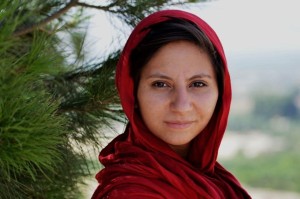 While working for the YWC, she and her other teammates organized several protests to condemn gender-based violence, street harassment and discrimination, created a center for women including an internet café and a learning center, and established a male advocacy group. In addition, Noorjahan and her team posted over a thousand posters about women’s rights around the city of Kabul and held sister sessions, meetings with civil society organizations, and employed media to cover the issues of women.

When she left to conduct her undergraduate studies in the United States in 2012, she felt that YWC had become independent and self-sustaining, so she decided to limit her involvement. This allowed her to focus more on her writing and education in the United States. She gives speeches in Afghanistan whenever she goes back to her home country.

She is a passionate blogger and freelance journalist who has published for Al-Jazeera, UN Dispatch, and Safe World for Women on the experiences of women in Afghanistan. She also regularly contributes to several Afghan websites and newspapers.

In the summer of 2013, Noorjahan and a friend published a collection of women’s poetry and writings in a book. The book is called ‘Dukhtarane Rabia,’ daughters of Rabia, in honor of the first Afghan female poetess, who was killed by her brother for writing poetry and falling in love. The Facebook page FreeWomenWriters

is dedicated to publishing the writings of women and men who write about the issues and concerns of women in Afghanistan. The audience of the page is Afghan people, which is why the entire material is in Persian. Noorjahan hopes that this page will become a safe space for female writers to share their writings.

Noorjahan confesses that the reason she writes is “to engage in conversations with my own people. This is why the majority of my writings are in Persian. I know that often my articles don’t reach a large audience, but I also know that change begins small and that my writings and those of other women do create solidarity among men and women who believe in a new Afghanistan where all will be treated with dignity. My writings have made it possible for me to connect to women from around the country, be inspired by them and share my thoughts with them. This is how the seeds of change begin planting in the heads of a group.”

While the level of literacy in Afghanistan remains low, Noorjahan is confident that, because over 67 percent of the Afghani population is under 35 and most of the youth is engaged in some form of education, writing will become an increasingly powerful tool for bringing change in the country.

There are many changes that Noorjahan would like to see in her home country, but one of the key ones that she has been working to achieve is creating a united, widespread and grassroots movement for women’s rights that would include men and women from all walks of life, ethnicities, races and socio-economic backgrounds in Afghanistan to participate in protests and mobilize for change.

She believes that, in order to achieve these changes, it is crucial to have more women in the media and what is devastating is that in the recent four years, the number of women in media has decreased due to threats, insecurity and the murder of journalists, especially female ones. Noorjahan stressed: “Having women in media might increase discussion on women’s issues in media, but the most important task it performs is this that it will normalize the existence of women in public places and “mainstream” women’s participation in different parts of the society. This will not only encourage more women to join media and the public sphere, but also make the presence of women in public normal and acceptable in the eyes of men and women.”

Noorjahan comes from an educated family that has always supported her, taught her to be independent and vouched for her rights. However, the experience of poverty, war, and sexism faced as a child growing up in Afghanistan brought to her attention the injustices existent in the status quo and gave her a sense of responsibility to challenge them.

Studying in Pakistan, Afghanistan and the US has taught Noorjahan that misogyny knows no borders, as women everywhere are victimized often blamed for the discrimination and violence they face, and treated like second-class citizens. However, this taught her not to be hopeless or accept the status quo, but to create a solidary for those who fight for equality that also knows no borders.

As for challenges, the young Afghani woman believes that time management is always difficult to achieve, but realizing that there is always more work than she can complete, the best thing to do is try very hard and not feel guilty about the things that she was not able to accomplish. Another challenge for her is the feeling of never doing enough, ‘because our world is filled with many challenges and our generation faces really tough decisions in the face of raising inequalities, wars, climate change, environmental degradation. There is really no way to get over this feeling of not being able to do enough. What one can do, I have found it, is to use this feeling to motivate oneself to do more.’

Noorjahan intends to conduct a master’s program in journalism. In the long run, she wants to go back in Afghanistan to report on the stories of men and women who are striving to create a progressive Afghanistan despite the threats they face. She plans to return also because she believes that her country needs educated youth to partake into changing it and transforming it into a stable democracy and wishes to contribute to that process. In addition, she believes that the scholarships and education opportunities that she received were partly due to the fact that she is from Afghanistan and owes her country and people to return their support by doing the best she can to be a positive voice during these years of transition.

When giving advice to other young changemakers, Noorjahan stresses: ‘Find your passion and work for it. Not all of us have to work for women’s rights or the environment or anything else specific. Not all of us have to protest. Not all of us have to tour and give speeches on human rights. However, what we all need to do is to find a way in which we can contribute to creating a better, more just and equal world by transforming our passions into actions. In this process, you will feel gratified, content and happy and every day, despite the many frustrations, you will go to be happy with yourself and feeling united with all those fighting for humanity, which is at the end of life all that matters.’