Tim Harris is the 27-year-old owner of Tim’s Place, a thriving and popular restaurant in Albuquerque, New Mexico that serves ‘breakfast, lunch and hugs’ and calls itself ‘the friendliest restaurant in the world.’ 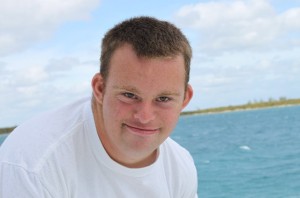 Born with Down syndrome, Tim started dreaming of opening up his own restaurant ever since he was 14. Tim may be the first and only person with Down syndrome in the US to run a restaurant. While in high-school, Tim worked as a host at a local Alburquerque restaurant, where he learned how to welcome guests and develop loyal customers.

During his high-school graduation week, Tim was voted Student of the Year by the administration, faculty and staff, after previously being selected as homecoming king by the greatest margin of votes in the school’s history.

Tim went on to attend Eastern New Mexico University in Roswell, New Mexico, were he earned certificates in Food Service and Office Skills. While attending college, he worked at various local restaurants. He graduated from university in 2008 and returned to Albuquerque, where he worked as a host at Applebee.

He nevertheless continued to dream of having his own restaurant. Seeing his determination and wanting Tim to succeed, Tim’s parents decided in May 2010 to sign a lease for a facility in Albuquerque, which would become his restaurant.

His high-school dream finally came true. Tim has been working hard to ensure the constant success of his restaurant.

Apart from serving food, Tim also likes to serve hugs to his customers, which he considers to be the best part of his job. Tim truly cares about his clients and wants to see them enjoy their time at Tim’s Place and return time and time again. For Tim, the number of hugs he has given are the measure of his success. He has a special hug counter, which keeps track of them. So far, he has served over 42,000 hugs.

In the future, Tim hopes to expand his business, but is determined to maintain its homey feel, which many of his customers are drawn to in the first place.

Apart from running a successful restaurant, Tim has also excelled at sports. He has participated in many Special Olympics competitions throughout New Mexico, winning dozens of gold medals. He jokingly brags about the fact that, so far, he has won more medals than Michael Phelps. Tim is also a public speaker, ready to talk about his experience as a small business owner to anyone willing to listen.

Tim declares: “I do not let my disability crush the dreams. People with disabilities, they can get anything they set their minds to. They’re special. We are a gift to the world.”

Tim and his parents hope that his example will inspire other children with disabilities to pursue their dreams.