Anton Abele is the youngest Member of Parliament (MP) in the world. At the age of 18, he was elected as an MP for Stockholm County in the 2010 general elections. He represents the Moderate Party, which he has stressed, is in a process of renewal, as it is introducing increasing numbers of young people. 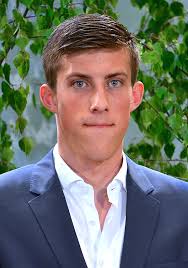 Anton rose to national and international fame in 2007, when he organized an online anti-street violence campaign and helped organize public manifestations, in response to the death of 16-year-old Riccardo Campogiani, who was beaten to death after an argument arose at a school party in Stockholm. Anton, who was 15-years-old and had attended the same party as Riccardo, decided to take action, by launching a Facebook page, entitled ‘Save Us from Street Violence,’ which in less than 24 hours, already had 3,000 members. A week later, he organized an anti-street violence demonstration in Stockholm, which was attended by over 10,000 people, while similar manifestations took part around the country. His Facebook group soon reached over 100,000 followers.

That same year, Anton founded an organization called Stoppa gatuvåldet (‘Stop street violence’), whose purpose is to increase the understanding of violence’s medical and legal consequences on young people, while also working to change people’s attitudes. In February 2008, the organization put together a manifestation against street violence in City Hall, which was attended by Crown Princess Victoria.

International responses to his online and offline initiatives quickly followed. In November 2007, MTV rewarded Anton with the human rights award ‘’Free Your Mind” at the MTV Europe Music Awards, while in January 2008, several Swedish newspapers named him ‘stockholmer’ of the year. Later on, in 2008, his Facebook campaign was selected as the most important community activity of the year.

When interviewed about his work in parliament, the young MP declared: “The important thing is to go unnoticed. It’s more important to have a commitment that people actually recognize as being genuine. I also believe that when you decide to go into politics the commitment is the main thing, it’s very important.” In a different interview, he added that: “This is probably the coolest thing I have ever experienced, a unique experience. As a young man, I wanted to deliver and live up to expectations.”

Anton has served on the Justice Committee, focusing primarily on young people and crime, which he describes as an important, but exhausting responsibility.

In July 2013, Abele announced his decision to withdraw from politics at the end of his term in 2014, citing disillusionment with the parliamentarian work climate, which he believes to lack empathy and positivity. He further emphasized that he often sees politicians focus on faulting their political opponents, instead of trying to come up with solutions to help their constituencies and of praising and supporting each other’s initiatives. The young MP confessed: “For me, this is a loser attitude. There is no one who can change the word by attacking people and their ideas.”