One of Tunisia’s Most Promising Female Leaders 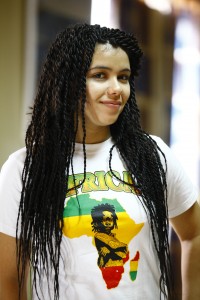 her passion to serve, inspire and strive for human rights, peace and social justice. She was recently declared one of Africa’s 28 most promising women leaders by the Moremi Initiative’s Leadership Development (MILEAD).

Aya started blogging during Tunisia 2011 Revolution, when she started feeling that the international journalists were not accurately reporting the events in her country, but were tailoring the events to Western media’s interests. Aya was a protester, photographer, documenter and social media mobilizer during the Tunisian Revolution. She was doing community work at the time and even volunteered at a refugee camp during Libya’s civil war. The young Tunisian blogger believes that the revolution marked a turning point in her generation, as a strong sense of belonging and unity emerged.

She decided to start her blog in English, in order to gain an international audience and to report to the world more accurately and from a Tunisian perspective the events occurring in her country. Aya does not consider herself a journalist, but a citizen journalist, which she takes to mean that she documents reality as an active citizen.

Her blog has managed to get tens of thousands of visitors from around the world. Aya confesses that her goal was never to have a successful blog, but one that engages people. The young blogger stresses: “I just use a language that most of my readers say it’s simple and speaks the reality. I also challenge myself to raise controversial issues such as racism and terrorism.”

Although Proudly Tunisian was originally focused on the Tunisian revolution and transition, Aya had the opportunity to witness and cover historical moments of other social movements, that she could related to through her country’s experience, such as Occupy Gezi in Istanbul, Occupy Wall Street in New York, Occupy DC and the Egyptian Presidential elections. She gradually started tackling other global issues, such as human women’s rights, youth and freedoms. While the blog’s topics have diversified, Aya has no intentions to change its name, “because I still write mostly about Tunisia, where my heart beats.”

Apart from blogging, Aya is passionate about volunteering, which gives her ‘a definition of whom I should be every day, serving others, uplifting others, inspiring others.’ The young Tunisian started volunteering in primary school, when she used to clean up her neighborhood on Sundays. She recalls: “I used to gather with the kids and knock the doors of all the houses to get people participate in the Sunday cleaning. I think at that early age, I didn’t see the environmental benefits of my action but I always had a sense of integrity to live in the community and make people happy around me.”

She considers her first real volunteering experience her visit to the Children’s Hospital Bab Saadoun in Tunis, where she facilitated reading, painting and photography workshops to kids fighting cancer.

Following her visit, she found out about the death of a 5-year-old boy with whom she had spent some time playing. She decided that she ‘had more work to do on this planet beside just studying and working.’ Aya has since volunteered as a teacher for under-privileged, events’ organizer in orphanages, integration centers and hospitals and children’s mentor in summer camps and peer educator on reproductive health HIV/AIDS.

Based on her work as a blogger, Aya has been invited to speak at multiple conferences and seminars, such as the Wheelock Global Conference in Boston on “Human Rights, Health and Education” as well the International Lecture of the National Cathedral School in Washington DC on the “Arab Uprising.” She has also blogged for global events such as the CIVICUS Youth Assembly in Canada and the World Innovation Summit of Education in Doha.

In 2012, Aya was selected as a Fulbright scholar in Georgia, United States. She recalls: “My first month at the university was overwhelming as I was the first Arab that most of the students had ever met and so it was really challenging to face all the negative stereotypes. I was wondering, “if my students who are taking an Arabic class have this perception of my culture, what is the perception of other students on campus?” I then decided not to miss any volunteering, event or networking opportunity to meet as many people as I could. I delivered as many presentations and talks as I could in middle and high schools, global citizen classes, programs, meetings, events on and off campus and even at a Methodist church.”

She also started a YouTube Channel “Proudly Tunisian,” where she uploaded short documentaries to break stereotypes about Arab Muslims. One of her videos got over 56,000 views and generated a continuing discussion.

When asked about her greatest achievements, Aya considers them to be “the young people I mentored and inspired either to start their own blogs or projects or even to start thinking about serving their communities and be change-makers. My accomplishments are very small attempts on individual cases to change people’s lives with the necessary transformation and needed follow up.”

One of her recent accomplishments have been the “Africa Inspire” project, when she ventured into Kenya and joined a committed Kenyan team, Rose Wachuka and Joshua Ogure, to produce a documentary called “Kenya’s Conscious Transformation,” which highlights the role of women and young people in Kenya’s peace process. Her larger aspiration, of which her blog and documentary are only the first steps, is to build peace and understanding by raising people’s awareness to rethink their perceptions of each other.

As for challenges, she admits that sometimes she is not taken seriously as a young person and as a woman, her leadership abilities are contested. She overcomes these challenges by “believing in myself and eventually people believe in what I do when they see the impact of my work themselves regardless of my age or gender. Passion is my drive even when I fail, I remember that everything happens for a reason and that I should never give up my dreams and aspirations.”

Although her blog and activities are keeping her busy, Aya currently plans to pursue a masters in peacebuilding and conflict resolution, as she believes that Tunisia needs mediators to unite rather than divide people. On the long-run, want to follow her passion in peacebuilding, blogging and documentary production, in order to help shape her country’s future and achieve social justice there and on the African continent. When advising other young people to become changemakers, Aya wisely suggests: “Get Involved! If we don’t uplift our nations and communities nobody will do it for us. We will be in those leadership positions sooner or later as those in power will not last forever so let’s all be well prepared. Once we are aware of our strength as agents of change, we can do a lot for our nations. Citizenship is not an identification written on our passport or etiquette in our badges, it should be more than that. Citizenship means that you don’t think only about you having a job, your daughter going to school, your father in a good health but you also think about the jobless, the illiterate, the poor and the sick in your community.”