Craig Lewis  is one of the inventors of Sprav, a smart water meter that allows users to determine, in real time, shower water and energy usage.  Based on these elements, shower costs are calculated and become instantly available for users. 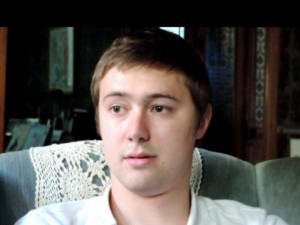 Because the young inventor’s device uses a Bluetooth module, users are able to upload their shower information to a smart phone or computer, allowing them to keep a historical data tracking record of the water and energy use during showers, but also to set water consumption and time goals for future showers. According to Craig, now a rising senior majoring in polymer engineering at Case Western Reserve University, the data tracking record is what sets his product apart from other similar devices currently on the market. Sprav is based on the idea that instantaneous information feedback can lead to better life habits, helping users cut their shower times, leading to positive environmental and budget results. In time, results could be made available on a wider platform to start a wider public discussion on water conservation strategies.

Watch our interview with Craig by clicking this link

The importance of a product such as Sprav becomes particularly obvious, when considering the fact that the U.S. has one of the highest per capital water consumption figures in the world. Sprav can be easily installed fitting between the shower pipe and the shower head.

Craig developed Sprav, alongside a team of dedicated young entrepreneurs, studying different fields at Case Western, which included Claude Valle, a mechanical engineer, responsible for creating the packaging of Sprav, and Andrew Schad, a recent Cleveland Institute of Art graduate, who is in charge of branding and product design.

The idea to create Sprav came about during an extra-credit project at university in 2011. The young entrepreneurs decided to pursue it outside of class, when one of their professors suggested they should enter it for the Saint Gobain Design Competition.  This competition  invites students to build a “prototype device that takes an existing material(s) and, using principles of materials science and engineering, creates a novel and innovative use for the material(s) in the device which solves a challenge for society.”

Craig and his team entered the Competition twice. The first year, in 2011, they won second place, then in 2012, they won first place, receiving a total of over  $13,800 in prizes over two years and access to expert coaches from different fields that could guide them in improving their product.  The young entrepreneur’s greatest achievement to date is being accepted into Bizdom, a startup accelerator program for entrepreneurs in Detroit and Cleveland. At the end of July 2013, it purchased 8 percent of the team’s company for $20,000, thus allowing Craig and his partners to further develop their product. For Craig, Bizdom’s interest in their product came as a validation of his team’s work and offered them the needed financial resources and momentum to further develop their product.

One of the most challenging aspects about developing Sprav has been balancing between the product’s design and its functionality, in order to ensure that the clients’ needs are properly covered and that the costs are kept as low as possible.

In terms of upcoming plans, the young entrepreneur indicated that his team plans to create a social media platform, centered around Facebook and Twitter,  in order to gain an audience, before starting to market their invenetion. Subsequently, Craig and his team hope to gather positive reviews from web magazines, such as Engadget and Gizmondo, which are credible sources of assessing new gadgets and consumer electronics, before launching their innovative marketing strategy.

The young inventors are planning to avoid engaging large companies, but instead going directly to their potential customers via crowdsourcing platforms, such as Indiegogo and KickStarter. Craig believes that Sprav will be successful, because it will resonate with many people’s growing environmental concerns and allow them to improve their life habits. In terms of a longer-term goal, Craig  believes the Sprav technology could be used for different applications, including for garden hose and kitchen faucets. Moreover, Case Western Reserve has agreed to help his team test the product, by allowing them to install it in several of the university’s dorms.

Craig also anticipates that the first Sprav model will likely cost around $75, appealing to a younger crowd of relatively high-earning people in their late 20s, but that each new model will be less and less expensive thus appealing to an increasingly large target group.

When advising other entrepreneurs to pursue their dreams, Craig suggests: “Follow your gut instinct. When we stood up to deliver our first pitches at our first competition, a couple of people laughed at us. Sometimes, when people can’t do things themselves, they are going to tell you that you can’t do it. But you have to be really persistent and when you know your product can be something, you can’t let anyone tell you any different.”