The new Simon Cowell? Jamal Edwards is media mogul at the age of 22

Jamal Edwards is a leading young British entrepreneurs. He started a media empire with his youth broadcasting channel, SB.TV, at the tender age of 15. Now 22, Jamal has an estimated fortune of £8m, runs a production team of ten people, and has worked with stars like Jessie J and Nicki Minaj. He played a key role in breakout of Ed Sheeran, whom he counts among his friends. 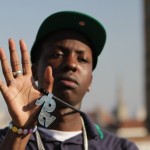 He also went from local artists to national celebrities. But these musicians did not show up at Jamal’s door. He relentlessly chased after them: “I started travelling to north, east, south London filming, waiting outside nightclubs. I went to some place in Shoreditch once. I had never been outside Acton. It was like a whole new world for me.” He confesses that he is always striving to top himself: “If I do a video, I’ve got to make sure the next video tops it.” At the age of 20, he signed a deal with Sony RCA, making him the CEO of his own record label, Just Jam Records. He also created a successful Channel 4 series, Inside SB.TV, and became a Virgin Media Pioneer. He once defined himself as a rebel when it comes to filming, shooting “everywhere, without permit or anything. This is a guerilla operation.”

Discussing the Google Chrome advert, which, undoubtedly boosted his success, Jamal reveals: “I hate that ‘I came from nothing to something’ thing that degrades where you came from. It separates people, and I don’t like that – we’re all the same, and I’m proud of where I came from.” He added: “I say, don’t play the blame game. I’m not speaking for all young people here, but I’ve come up against a lot of people blaming the government or other people for their situation, and I just say don’t blame anyone or anything. You can do whatever you want, and you can make your own future.”

One of the young entrepreneur’s current aims is to expand SB.TV to be “a youth hub, so that if you’re interested in fashion, comedy, sports or games, you can go to SB.TV. When I first started, I had to start with something that I knew and I knew music. But now it’s my plan to expand.” He would also like to incorporate live events: “I’d be interested in doing a monthly event that could give the many fresh singers I know a live space where they might never have performed before, a sort of open-mic night feel.”

His advice to young people who want to follow in his footsteps is that: “Have a niche, create a unique selling point. Be creative and chase your dreams. Don’t stop. Don’t accept any knock backs.”