Shea Gouldd, an 18-year-old, from Delray Beach, Florida, had an interest in cooking since before she can remember. According to her mother, as a toddler she preferred to watch cooking shows rather than cartoons. 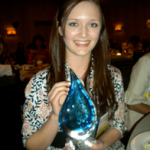 Her mother recalls that Shea always wanted to help make dinner. Her mom would let her snip green beans with scissors, measure rice and carry out other small tasks. Shea’s passion for cooking gradually turned to baking.

Since baking ingredients are rather expensive, her mother, a self-employed single-parent, challenged her to earn money. So, in 2008, at the age of 14, she started selling gourmet cheesecakes and seasonal breads to family friends and neighbors to earn money for baking and developing new recipes.
The business won customers and soon she could open her own bakery: Shea’s Bakery.  Family friends allowed the teenager to use a kitchen inside an office, in exchange for Shea’s catering for their occasional events. Through word of mouth, the young entrepreneur managed to have over 30 orders by that Thanksgiving.

Without any marketing her business grew 300% in one year and eventually caught the attention of local media. Shea believes that the reason for her bakery’s success is the high-quality ingredients she uses and the love she puts into her cooking. Her bakery carries over 60 items, including cakes, cupcakes, brownies and seasonal breads. The first store that displayed the young entrepreneur’s products sold 720 cupcakes in one week and over 900 cookies, brownies and breads during a second weekend.  In 2012, she was able to hire a full-time employee that managed the business while Shea was at school.

While significantly busier than most teenagers her age, Shea was also a dedicated student. She maintained a 4.7 GPA at the Spanish River High School and was part of the National Honor Society.  She was also enrolled in the Entrepreneurial Academy to improve her business skills. She also played tenor saxophone in the school’s decorated marching and symphonic bands.
Giving back to the community is important to Shea as well. Ten percent of all her products are donated to charity. Her bakery donates goods to a local soup kitchen where she has also served, and her bakery proceeds go to various charities.
Moreover, Shea is currently in the process of trademarking “Pattycakes,” her culinary invention, two cakes pushed together with icing in the middle like a giant cookie.

Check out Shea and her bakery at:
http://www.sheasbakery.com/Sheas_Bakery/Shea.html