For Middle School version click here
Most kids rather carelessly throw lots of stuff in the trash.  Fifteen year-old Kelvin Doe of Sierra Leone finds stuff in the trash and built a radio station. The station broadcasts news and music and now Kelvin is known as DJ Focus.  He has engaged the help of classmates (average age 12) to report the news every day in his community. 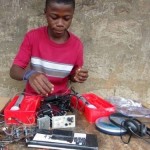 Kelvin makes what he needs and so since his community, like one and half billion other people around the globe need electricity, a windmill is to be his next invention.

Sengeh made a video of what Kelvin has created and also showed him coming to MIT.  As result of that video, several colleges have offered Kelvin a full scholarship to come back to get a full university education.  Check that video here.