Cecilia Cassini: the youngest fashion designer in the U.S. 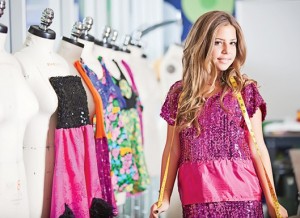 Thirteen-year-old Cecilia Cassini from Encino, California was the youngest designer in the U.S. and one of the youngest in the world, when she launched her own label in 2009, at the age of 9. By 2011, she had already created over 500 original pieces and dressed many celebrities, including Heidi Klum and Miley Cyrus.

The young designer primarily creates clothes for girls between 4 and 14, but often adapts them for adults as well. Cecilia likes to use feathers, fur and bows for her designs.< She designs all the clothes herself.  In order to balance school work and designing, Cecilia does her homework in the library during recess, so after school she can focus entirely on her creations.

It takes her about 15 minutes to create her dresses, which cost between $62 and $150.  She considers her signature piece to be her “big-bow dress. Bows are chic, and they add something amazing to everything.”

She explained the advantages of being a young designer, saying:  “Sometimes adults create clothes for kids thinking that we don’t have sophisticated tastes yet, so what I’m bringing are very modern, high-fashion looks for kids from a kid’s eye. I know what girls my age want to wear.”

In an interview, the young designer recalled that she started designing when she was 4 years-old, when she “started cutting up clothing and began repurposing the material.”

Everything changed when Cecilia received a sewing machine from her grandmother for her sixth birthday. She hasn’t stopped designing since.

Her big break came during her first trunk show at Tough Cookies, a children’s shop in Sherman Oaks, where the young designer sold 50 pieces in three hours. In 2012, Cecilia got her own reality show, called Confessions of a Fashionette” on Style Network, following her efforts to expand her clothing line, by organizing a major trunk show in Los Angeles.

The young designer wants to be a role model for other young people and encourages her peers to chase their dreams. She revealed in an interview: “I’ve always wanted to be a fashion designer, and I think we shouldn’t wait till we’re older. I think that we should just do it now so I’m following my dreams and I hope that other little girls follow theirs.”

Cecilia also likes to give back to the community. Cecilia has responded to the invitation of several elementary school teachers, who wanted her to talk to their students about how she made her dreams reality and inspire them to do the same. She also funds charities that help people, especially children, follow their dreams.