Cosmin Mihaiu, a 23-year-old Romanian, is on his way to revolutionizing physical therapy. 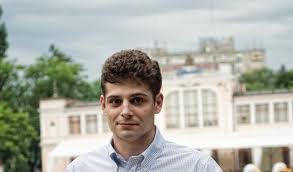 With three other classmates from the Software Engineering Department at the Babes-Bolyai University in Cluj-Napoca, Romania, Mihaiu has developed a computer software program called the Medical Interactive Recovery Assistant (MIRA), which helps patients undergoing physiotherapy recuperate faster and  have fun doing it.

In an interview for Forbes Romania, Cosmin explained that MIRA is a software product made up of several games tackling multiple pathologies. The games are developed based on medical advice received from doctors and physical therapists who are collaborating with the young Romanian and his team.

Standing in front of the MIRA monitor, patients execute movements recommended for physical therapy that can be monitored by a doctor via a computer or cell-phone. The MIRA program also has the ability to warn the patients when they are not executing the movements correctly.

Cosmin and his three classmates developed the MIRA software as a project proposal, while they were still in university. The idea was sparked when Cosmin recounted how, at 7 years-old, he broke his arm and had to undergo a slow, painful and boring recuperation period. The team imagined how helpful an easier recuperation process would be.

In 2011, they entered their idea in Microsoft’s Imagine Cup Software Design Competition. Their team made the top six out of 70 teams from around the world.

They got the opportunity to meet with Steve Ballmer, the executive director of Microsoft, who personally congratulated them for their invention, emphasizing that he loved their innovative integration of xBox Kinect into medicine.

After their success at Imagine Cup, which validated their idea’s usefulness, Cosmin and his partners decided to transform their project into a business.  The idea needed funding to get off the ground, however. In 2012, they applied and were selected for the first medical startup accelerator in Europe, Healthbox Europe, in London. At the event, their company started to take shape. An audience of around 250 medical experts and leaders selected MIRA as the winner of the Innovation Award, receiving £10,000. The team also made valuable contacts and received advice from top global medical leaders.

The MIRA software is still in development and has not yet been released. In order to prove its its benefits, the young entrepreneurs are in the process of testing it clinically in Romania and the UK.

Apart from its Microsoft and HealthBox successes, the company was aslo selected for Kairos 50: one of 50 most innovative student-run startups in the world.