Ludwick Marishane: the young inventor of the DryBath

In 2007, Ludwick Marishane, a South African high-school student, was sunbathing with friends on a cold winter’s day. Before going to take a bath, one of them exclaimed: “Why doesn’t someone invent something you can just put on your skin and avoid the need to bathe?” 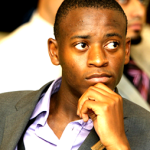 The proposition immediately got Marishane thinking. He would buy that product. Realizing there is a market of around 2.5 billion people around the world who lack even basic access to water and billions more who, like his friend, are too lazy to shower, Marishane tried to create the product. After six months of researching the Internet on his web-enabled basic cell phone, Marishane invented DryBath, the world’s first and only bath –substituting skin gel, an odorless substance that has the same effect as anti-bacterial cleanser and creates a biodegradable film that cleans and moisturizes the skin. Marishane patented his product and registered it as a company to commercialize it.

Marishane explained that he invented his product “to benefit people from the poorest communities in the world, and also for people in the developed world. For people without water, DryBath provides empowerment as an affordable tool to achieve lifesaving personal hygiene without having to be dependent on stagnant community water infrastructure development. For wealthier communities, it offers a convenient way to save time and decrease their unhealthy practice of unnecessary daily bathing (which is proven to cause continuous drying of the skin), while achieving adequate personal hygiene. In both situations, precious water is saved, which can be put to better use.”

Lacking complete access to bathing water can lead to trachoma, a disease which affects the eyes and can cause blindness if one is repeatedly infected. Simple face washing can prevent the disease. On the opposite extreme, Marishane hopes to use DryBath to raise awareness of the consequences of excessive bathing. He explained some people are bathing two or more times a day. He stressed:  “This has lead to our skins becoming sensitized by all the purifying chemicals in the water, and that’s why every new skin lotion is always touted to be twice as moisturising as the last. We bathe all the time and try to repair that damage with expensive lotions which we shouldn’t need in the first place. We want companies and communities to get involved with the campaign.”  The young entrepreneur hopes his invention will help reduce water-shortages, which are expected to reach extreme levels by the year 2030.

Funding for DryBath proved difficult. Marishane was rejected by all the venture capital firms he applied to. He had no security to secure a loan from a bank, either. Luckily, Marshane discovered business plan competitions, which helped him raise over $50, 000. They also provided “valuable media attention, access to potential clients, and validation for the company and product.” His company is currently selling DryBath sachets to corporations “at around USD1.5 per sachet (1 sachet contains 25ml and replaces one bath). For each sachet that corporates purchase, we provide a free sachet to our charity partners for distribution through their humanitarian work. We sell DryBath sachets on the retail market in poor communities for USD 0.50 each, with an aim of lowering this price in half when we reach economies of scale. We have sold 162,000 sachets to date.”

The young entrepreneur  believes the best time to start a business is as a student. For says, being at university was a great incubation phase for his company and that, although challenging at times to manage both the business and school work, he found that the work ethics translated well between the two. The South African advised other young people interested in business development to “find what you love doing, and exert all your effort on pursuing it. Do as much as you can on your own, and always ask for help when you need it.” He also stressed: “The most important skill you need to cultivate is the ability to teach yourself things very quickly, and to fail very quickly in order to learn. If you work on something you’re truly passionate about and have social support for the work you’re doing, the rest sorts itself out.”

DryBath is not the young South African man’s first invention. In the 9th grade, he created his own biodiesel, while in the 10th grade, he invented a healthy cigarette, but realized he lacked the resources to take on the tobacco industry. He also wrote a mobile dictionary and magazine supplement that society just wasn’t ready to publish. For inventing DryBath, Marishane received the 2011 Global Student Enterpreneurship Award (GSEA) at the Global Entrepreneur Week (GEW). This is the highest student entrepreneur award in the world.

Between the 5-7 of July, 2013 Marishane’s company will organize a No Bathing Weekend, in celebration of this year’s international World Water Day and the United Nations International Year of Water Cooperation to promote water saving. Marishane’s company hopes to convince people to skip one million baths this year, although he would personally prefer the number to be around 10 million.

Marishane is far from slowing down. Later this year, Marishane plans to launch The Art of Business Challenge (ABC), an entrepreneurship league aiming “to leverage the youth’s interest, advertisers who are dying to reach the 15-24 age-group, and the low entrepreneurial drive within society’s youth. It is going to be teaching youth stuff they can’t learn in a classroom, and we aim to make the process more entertaining for the television spectator than the FIFA World Cup. The league has been under development for 2 years now.”