Maddie Bradshaw: the 16 year-old girl who makes $1.6 million a year

Maddie Bradshaw is the President of m3 girl designs, a jewelry company, with annual revenues of around $1.6 million, selling over 60,000 necklaces per month in over 6,000 U.S. retail outlets, including Amazon.com and Nordstrom.

Everything started when the young girl was 10 years-old and wanted to decorate her school locker, but couldn’t find anything interesting and original. When her uncle, who had an old Coke machine, gave her 50 bottle caps, she decided to decorate them herself and put magnets on them. The now 16-year-old recalls: “When my friends saw the caps, they wanted me to make some for them.” 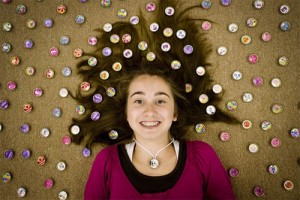 Their enthusiasm determined Maddie to try something new: design necklaces with a metal pendant to attract the bottle cap, which she called Snap Caps®. The Snap Caps aim to capture and celebrate every girl’s unique personality, with themes ranging from initials, music stars and fairy tales. Bradshaw took 50 of the necklaces to a local toy store. In less than two hours, they sold out. The young entrepreneur remembers: “At that point, I knew I was onto something. […] I think we were successful in the beginning because I was more focused on having fun and less worried about failing.” While she only spent $300 of her own money, matched by her mother, to buy supplies, the young girl already made her first million by age 13.

Maddie, alongside her younger sister, Margot, who is the company’s vice-president, creates the jewelry designs. She also attends all the company’s meetings and trade shows. The young entrepreneur has recently added a new line of necklaces, called Spark of Life, which targets an older group, teens.  She revealed:  “The great thing about our company is that it’s growing with me. […]As my tastes change, so will the products.”

Bradsaw has also published a book, called You Can Start a Business, Too, after receiving numerous emails from young girls who also wanted to start a business. At the same time, she is striving to create a scholarship to help aspiring young entrepreneurs, as she confessed:  “I love that I have an opportunity to reach out and help others. […] Not everybody has the money like I did to pay for start-up costs.”

Bradshaw’s initiative has attracted local and national media attention. The young entrepreneur appeared on ABC’s
“The View” and the “Shark Tank,” while her work has been featured on the Teen Choice Awards. Regarding her appearance on “The View,” Bradshaw confessed: “I was so nervous about answering questions from Barbara Walters.” She added: “But with each new opportunity to talk about the company in front of people, I gained a bit more confidence and learned that I could do more than I thought I could do.”

While on “Shark Tank” in February 2012, Bradshaw asked the “Sharks,” five investors who listen to business pitches and offer financial and mentoring deals with entrepreneurs, to invest $300,000 in her company, while proposing a 15% stake in the company. M3 girl designs ended up offering 30% equity in the business for the $300k, but obtained considerable value for the additional 15%. Instead of one “Shark” offering to launch her company internationally and mentor her, three investors, Mark Cuban, Robert Herjevic and the QVC Queen Lori Greiner, together worth billions of dollars, accepted to invest in the young girl’s business.

While her own company continues to rise to unexpected heights, Maddie’s Bradshaw advises other young entrepreneurs to: “Follow your passion. If you come up with an idea and you love it, chances are other people will, too.”