Vlad Tudose is the young creator of Puzzled.by, a social platform aiming to answer all of its users’ questions and satisfy their curiosity. 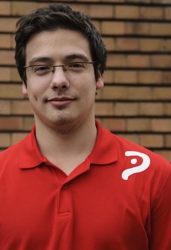 The idea for the site came to Vlad at work, where he needed access to a service to test an idea. He did not want to use the available Facebook tools, knowing that the answers obtained through them would be too subjective to form a clear opinion, and soon realized that there was no other website providing what he needed. He immediately saw the opportunity and decided to seize it.

So, while conducting his master in innovation management at the Rotterdam School of Management, the young Romanian entrepreneur created Puzzled.by in collaboration with two friends, web designer Laurenţiu Lupu and Mihai Fratu, programmer at Adulmec.ro, an American-led company in Bucharest that Vlad had also worked for.

Puzzled.by is developed around a world map with users coming from all corners of the world posting and answering questions with fixed choice answers. The questions can either be seen by anyone or they can be restricted based on age, gender or country, depending on the users’ objectives.

The login to enter the website is conducted via Facebook, as a strategy to get people interested in the site. The young entrepreneur emphasizes: “I realized that, when signing up, people want to know what their friends are doing and what questions they are asking. When the user discovers that  he is not alone on the platform, that his friends are there as well, he is more likely to start interacting.”  That is also why the site was also given a notification system, letting users know when their friends post a question and what answers their friends have given to various questions.

In describing his website, Vlad highlights: “Puzzled.by is a user-generated content site, targeting primarily start-ups that want to test out ideas, but do not have large funds to spend on market research.”  He further reveals that the site aims to quench any curiosities people may have, from the serious to the funny ones, as well as to help people make better decisions.

After developing the website’s first prototype alongside his partners, Vlad met with one of the leaders at Adulmec.ro, who offered to invest $50,000 in exchange for a part of the company’s shares, an excellent start for a company still in its beta phase.

The young entrepreneur believes the site will catch on, because it is simultaneously fun, informative and helpful for users. Puzzled.by also has an integrated reward system, based around “badges,” awarded after a user answers multiple questions. In the future, Vlad stresses, the badges will come with certain advantages to encourage users to remain as active as possible.

In terms of promoting his website, the young Romanian wants to participate in start-up contests, such as The Next Web held in Holland, which would help him attract mainstream media attention, and use blogs to promote his work. He also hopes to enhance his audience from other user-generated content websites, by directing people from certain posts to related questions on Puzzled.by.

In terms of upcoming objectives, Vlad hopes to reach the final for the Next Web contest, which could help him gain one million users in the next five months as well as start creating mobile apps, for Android and iOS. Another key goal for the young entrepreneur is to start allowing brands and Facebook pages to login in on the website, which is currently not possible. In terms of monetizing the site, Vlad thinks that, in the near future, “we will be able to ask for payments for the sponsored questions, which will be appropriately marked and kept under a certain limit, to ensure that visiting the website remains a pleasant activity for all users.”

When advising other young people to become entrepreneurs, the young Romanian stresses: “See first what investors are interested in, in order to obtain funding for your start-up.” He adds: “If you believe in your product, it’s worth trying anything. For a platform such as mine, all you need is a designer and a programmer. You need people to believe in the project, first and foremost.”