In 2010, Yasmine El-Mehairy  was looking online for pregnancy advice for her sister-in-law. She soon encountered conflicting opinions and found not expert input that could clarify the contradictions. 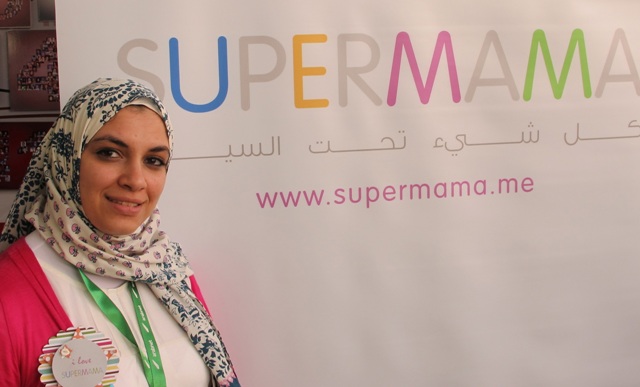 In reaction to her searches, Yasmine, with the help of Zeinab Samir, with whom she had worked, decided to create a website providing tips and expert advice for mothers and mothers-to-be. While chat forums for mothers existed in the Arabic world, the information provided there was not verified by experts. This rendered SuperMama the first veritable online parenting community for mothers in the Arab world.

The site addresses topics that range from pregnancy and parenting to cooking advice.  It has content in Arabic and English and is entrepreneur-of-the-week”>divided into six main sections: Pregnancy, Parenting, Kitchen, Homes, Me time, and SuperPapa. The last section is designed to help men better understand mothers and mothers-to-be, given that 10 to 15 percent of the site’s visitors are men.

Yasmine stressed the importance of the site’s regionally-targeted information: “The Middle East and North Africa is so different from Europe and the US, not only in how people react and are motivated, but also in the details, like how much babies should weigh and vaccination schedules and how to handle teenagers. That’s where SuperMama stands out. That’s why our experts are Arab, or Egyptian. They know what mamas need to know.”

The main writers for the site are mothers, working from home, as there is no centralized office. There is only one monthly meeting to discuss upcoming topics and articles. Yasmine reveals: “The writers send their work in through email and we send it for verification to the specialists,” ranging from doctors and teachers to nutritionists and exercise experts, who are all volunteers. Their role is to confirm or dispel the information provided by the mothers, in order to ” preserve the knowledge that has been passed between generations.”

SuperMama demonstrated its substantial success potential, when in only four days after its release, it received over 5,400 visits, over 200 registered users and a substantial Facebook and Twitter following. The website was expected to generate over $1.6m after its first year, mainly from selling advertisement banners, sponsorships, and product placements inside the articles and videos. While it is still confronting some financial difficulties, Yasmine emphasized: “We didn’t want to have just another commercial product; we wanted an idea that made a difference.”

Although still new on the market, the website has already won a considerable number of prizes. In 2010, out of 3,800 applicants, it was selected as one of the 20 semi-finalists  the MIT Arab Enterprise Forum Business Plan Competition, which allowed Yasmine to make important contacts in the IT industry, who contributed to the website’s development.

It also won the NexGen IT Competition, an Innovation Competition based in Poland, Arabnet Cairo and was chosen as a finalist in the Google Ebda2 Competition.Winning these contests ensured the website not only mentors, but investors as well.

SuperMama is and intends to remain non-political and non-religious to be used by anyone across the Arab world. When the violence in the Tahrir Square started during the 2011 Egyptian Revolution, one of the mothers complained that the site was not extending condolences to mothers who had lost children in the fight. Yasmine confessed:  “For us what kept us through is that the other mothers on the site supported this argument and told that mother that we are a non-political and non-religious site and that this is a parenting site and not a place to discuss political issues.”

In terms of her future plans, Yasmine hopes that, by 2015, SuperMama will become the number one Middle Eastern website for women. At some point, she would also like to have a radio or TV program and to start mentoring other young entrepreneurs, in order to give back some of the help that received.