A single idea from a human mind can build cities, transform the world and rewrite the rules. In 2014, Navneet Sharma, 26, hailing from Rourkela, Orissa, India, faced a problem that most of us encounter. One fine night, when he was walking down the streets of Bangalore, Navneet saw a mannequin with a beautiful, a perfect gift for his girlfriend. He soon discovered the price was higher than he could afford. 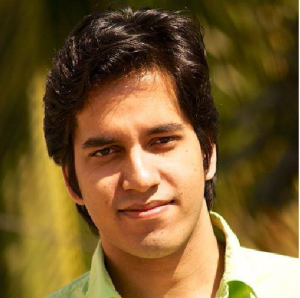 He snapped a picture of the dress and went hunting for it on online stores to no avail. While he ended up buying something else for his girlfriend, he also came up with the idea of his app, Snapshopr, to ensure an easier way to search for visual items, as he knew many people faced a similar problem. The app has an image recognition capacity for all angles and scale searching through millions of possible matches, ranking them and prioritizing them before sending them to the user. The user can then easily purchase the product that they wanted online. The app is powered by state-of-the-art in recognition technology, such as Deep Learning.

Navneet is a graduate in mathematics and has a Masters in Computer Science from a reputed Indian university, VIT. He dropped his educational pursuits twice, trying to find a purpose in life, and started reading philosophy.  He is very passionate about building his app, Snapshopr. Navneet managed to build a team of four around his app- Debashish, Vivek, Richa and himself. Together, they are creating an excellent work environment by complementing each other and having a good sense of understanding among themselves. They are determined to make SnapShopr a successful and easy to use app.

Apart from his app, Navneet has been involved in other projects. He considers his main accomplishments to date to include founding an independent artificial intelligence (AI) club named The AI Club during college as well as mentoring around 30 students in fields ranging from Machine Learning, IoT to Robotics, some of whom went on to publish papers in reputed journals and projects that got well-deserved recognition. While facing many challenges in the early stages of launching the club, Navneet persevered, as he was determined to make people’s lives better and easier. He faced a financial crunch, while building up an AI infrastructure, which can be a bit costly in India.

When advising other changemakers to follow in his footsteps, he emphasizes: “Persistence is key to success. Find what you love and pursue it with absolute focus.”

The readers can view the app and their webpage through this link: http://www.snapshopr.co/

This app is available only in India for now.