In Uganda, children with special needs are systematically prevented from succeeding academically and fulfilling their potential. There are an estimated 184,000 children in the country, who have some type of disability making it difficult for them to learn. 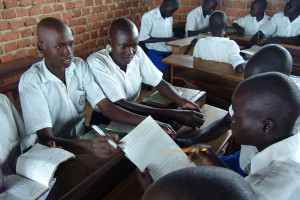 These students often drop out of school due to poor performance, as they face constant physical abuse from their teachers, who fail to provide the needed academic support that these students might need and follow up on their learning results. This is partly a result of the fact that teachers often have to tackle large classes of up to 120 students and, thus, have limited time to assess each student’s progress.

The Ugandan government has started taking some measures to address this issue, by setting up a department for special needs education at the Ugandan National Examinations Board. Nevertheless, much more needs to be done, especially at the grassroots implementation level.

Thirteen-year-old William Muyomba is a special needs child, as he has hearing and speech impairment. He studies in the Ugandan school for the Deaf. He received the same treatment as in a regular school, as his teachers, whenever he was struggling in school, applied physical punishments rather than strive to provide support. William was not the only one struggling academically. In his class of 20 children, only five managed to get good marks in all the four subjects that they were taking.

At first, William decided to approach his mother about these school abuses, but she instructed his teachers to physically punish him, if he failed in class. Despite the lack of parental support, William was determined to turn the situation around for him and his classmates. He created a club in school, called Happy Child, aiming to improve teachers and parents’ ability to understand and support children with disabilities and their scholarly needs and end corporal punishment at school. The club currently engages all students and teachers in dialogue at the school assembly and educates families on how to appropriately support their children’s personal and academic success.

While, initially, his club idea was received with skepticism at the school level, partly because of the school’s insufficient funding to support it, with the help of one of his teachers, William managed to make it come true and be successful. As a result of his initiative, parents, teachers and the school management committee started to meet regularly to discuss ways in which to improve the learning experience of students with special needs. The rate of corporal punishment  has reduced drastically as well. At the same time, out of 35 parents for the students in his class, 30 now follow up on their children’s performance. William’s mother too monitors his results and strives to provide him learning support whenever she can.

William enjoys keeping himself active and engaged outside the classroom. Apart from starting the club, William is also passionate about sports, in particular soccer and volleyball.

In response to his tireless work to make the school environment better for children with disabilities, Ashoka Changemakers selected William as a Youth Venturer, at the suggestion of Irene Mutumba, the creator of the Private Education Development Network. The Network aims to challenge the traditional education system in Uganda, by creating a new learning environment, where young people are encouraged to think and act like entrepreneurs.

When advising other young changemakers and entrepreneurs to take action, William emphasizes: “Have a vision. (…) Be creative, but don’t forget to seek advice as well.”