Bogdan Pandea is a 23-year-old student in Cluj-Napoca, Romania, who runs a mobile coffee shop on his bike, called Captain Bean.  Through his initiative, the young Romanian aims provide customers locally brewed coffee that best suits their needs in a professional and interactive way. 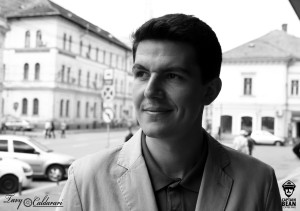 Bogdan started dreaming of opening Captain Bean in 2012, when he got positive reviews for a business plan he presented in front of business experts at a program dedicated to young entrepreneurs in Cluj. He couldn’t implement his idea immediately, as he had already signed up to do a ‘Work & Travel’ program in the United States (U.S.). He credits this experience as the best part in developing his business plan, as he learned everything from financing and management to motivation and customer service. Bogdan was determined to bring the system he had experienced in the U.S. to Cluj. It took two years of preparation to make his idea a reality, as he opened his business in early 2014. He believes this time helped him become knowledgeable and able to overcome obstacles with ease.

The venture’s catchy and fun name, ‘Captain Bean,’ came as a result of a brainstorming session with a close friends, who suggested it, because of Bogdan’s interest in military affairs and the fact that his father had worked in the Army.

For Bogdan, the name is meaningful, because it reflects his life, which was ruled by discipline, instilled in him by both his Army father and his mother, a teacher. Bogdan further explains: “In the army, consistency is key. Consistency is also crucial in a coffee shop, because you have to provide the same quality coffee every moment, day after day. Army is also all about seriousness, and this is how we treat everyone and everything that interacts with Captain Bean, of course with a glimpse of humor.  Plus, I always wanted to work in the army, so I made my own brigade, a coffee brigade.”

Before starting Captain Bean, Bogdan was not an expert in coffee brewing. As soon as he got his business idea, he started learning about it online. Prior to opening his venture, he organized a training session with a local coffee distribution that implemented the theory of making coffee in practice. 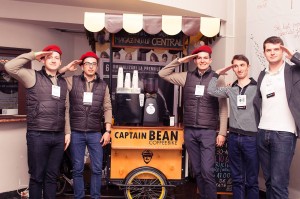 As Bogdan’s business rapidly proved to be a success, he employed four more people, who devote themselves and offer constant added value to the business knowing that only together they can succeed.  With the coffee distributor’s help, the young entrepreneur also trained his team mates, who beforehand had no idea how to brew coffee. As for the service system, he trained them to serve people as he had seen done during his work in the U.S. and to emphasize the customer more than the product.

At the moment, Captain Bean has a stationary point, in the center of Cluj, where it prepares coffee for a large number of loyal customers and new buyers. However, Bogdan and his team do not pedal around town to serve coffee, due to the logistics behind the art of making espresso. If invited to large events, such as TedxCluj, to provide coffee breaks, Bogdan and his team mates are happy to go.

In making his dream come true, the young Romanian entrepreneur faced multiple challenges. One of them was the notoriously convoluted and time-consuming Romanian bureaucratic system, as he was required to fill and file an enormous amount of paperwork and to convince the local authorities why having an espresso machine on a bike is a perfectly viable business concept that had been successfully implemented in other countries.

Another challenge was creating and assembling the coffee-bike, in order to provide good quality coffee, while being esthetically pleasing as well. The coffee bike is a cargo bike, which has a storage place for coffee, syrups, sugar and other maintenance items as well as a refrigerator to preserve milk. The bike has a counter, on which lies the heart of the business, a small compact espresso machine and a top notch grinder. Bogdan has proudly overcome these obstacles and, in the process, he has managed to attract local and national media attention.

The young entrepreneur believes that monotony is one of the key problems that leads to the destruction of small businesses. In order to surprise Captain Bean customers and offer them a product that they value above its price, Captain Bean constantly organizes contests and events as well as posts photos on Facebook. Bogdan explains his business’ emphasis on original engagement, by stressing: “We make business with people, not coffee. People are the ones who buy the product and they must always be at the center of our attention. We are not the best baristas training in the best latte art, but, when you come to Captain Bean, you will be amazed by our art of talking to you and always preparing a coffee that best suits you.”

As far as short-term goals are concerned, by the end of 2014, Bogdan wants to have two working stations in Cluj and to expand his team to six people, in order to cope with growing customer demands. At the same time, he intends to broaden the variety of Captain Bean products, in order to increase customer loyalty and grow his brand to the next level.

On the long-term, the young Romanian entrepreneur would like to have more sale-points in Cluj and eventually to take this coffee shop model to other key cities in Romania and transform Captain Bean in a large national chain of coffee shops that offer a large number of people high-quality service.

Bogdan’s advice for young people wanting to start a business is “to be prepared to follow the natural course of entrepreneurship. Having your own company requires you to work harder than everyone else, while being a good manager and supervising the people that work for you means ensuring that they perform equally well with or without your presence. Last but not least, being an entrepreneur brings the responsibility of creating a system that works by itself.”

He adds: “Integrity is as important as time and money. Good manners and respect will always bring other people close to you. You always do business with people. Whether they work with you or they are your customers, you have to understand them and be able to communicate to them. If you learn this and master this skill, you will not only succeed, but also help others succeed in their path.”

Youth prides himself with creating the first online television in Romania