15-Year-Old Jazz Podigy: The Girl With Big Hair and a Big Voice

Tallia Storm, a 15-year-old from a small Scottish village near Glasgow, has always known that her passion in life is jazz music. 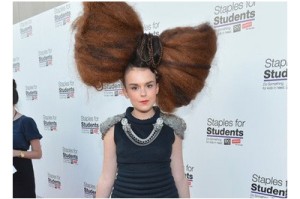 She believes that, if you are passionate about something, then you have to be constantly ready to seize any opportunity that presents itself to make your dream come true.

That’s why, before she was discovered, the rebel-haired Scot always carried her demo in her purse, never ceasing to believe that she would have a chance to use it. For Tallia, that opportunity arrived while she and her family were celebrating her grandfather’s 80th birthday in Hawaii.By chance, her family had to move hotels before returning to Scotland. That’s where Tallia’s father saw Elton John. The sighting sent 13-year-old Tallia into a frenzy; she needed to meet and talk to the music legend. Much as she tried, Tallia couldn’t spot him.

When Tallia had just about given up the search, on the morning of her departure, she noticed Elton John’s partner, David Furnish. This was the lifetime opportunity she had been waiting for, and she made sure not to miss it. She walked up to Furnish and presented to him her demo as well as a hand-scribbled note, which explained her admiration for Elton John and her music style, and asked him to take a listen to her CD and give her some advice.

The next day, while preparing to pass through airport security, she received a call from an unknown number. Although the airport police were demanding that she immediately turn off her cellphone, she decided to take the call. Much to her disbelief, it was Elton John. Just as they began talking, her phone died.

Her older sister managed to quickly change their phones’ SIM cards. Fortunately for Tallia, the phone rang again. Elton John told her that her vocals were some of the most exciting he had heard in years and invited her to open at his June 2012 concert at The Falkirk Stadium in Scotland. This was more than Tallia could have dared imagine would come out of their conversation. She ecstatically agreed and, in June 2012, she performed in front of an audience of over 17,000 people. Her raw, soulful voice won her great critical acclaim in Scotland and expanded her audience both nationally and abroad. Afterwards, Tallia confessed that one of most incredible aspects of performing was hearing her voice echo across the stadium. Following the concert, Elton John met Tallia and gave her some career advice.

Since, Tallia has been working hard to put together an original debut album. When asked about her musical style, she describes it as ‘neo-soul-jazz with a twist,’ emphasizing her influences such as Ella Fitzgerald and Beyoncé, as well as John Legend and Justin Timberlake.

Apart from being on her way to becoming a jazz star, Tallia will likely become a fashion icon as well—she has a unique fashion style, which she likes to describe as “a little quirky; eccentric almost.” She credits her older sister, her stylist, with her fashion choices. The young Scottish singer believes that “fashion is all about being fun and not playing it safe.” In 2012, she got fashion magazines talking when she wore an oversized hair-bow on her head at the Teen Choice Awards in Los Angeles, where she was performing at the after party.

In 2013, she was one of the teens invited to share her story at the TEDxTeen conference, where she met Chelsea Clinton, who was the presenter that year, as well as other incredible young people from around the world. Apart from singing, Tallia also loves to support charitable organizations. Since 2011, she has been a celebrity supporter of Jeans for Genes, an organization working on behalf of children with genetic disorders; she continues to be the nonprofit’s Scottish Ambassador.

Since her encounter with Elton John, Tallia has had a packed schedule comprising live events in the UK and studio recording to prepare for what is likely to be a smash debut album of a lifelong music career!