Most are familiar with the dazzling leotards, skirts, and costumes in which ice skaters perform. Zahra Lari, an 18-year-old from the United Arab Emirates, is making an addition to her outfit: a hijab.

Zahra Lari, an 18-year-old girl from the United Arab Emirates, is the first figure skater from the Gulf region to participate in international skating competitions and to do so wearing the hijab, the Islamic headscarf. 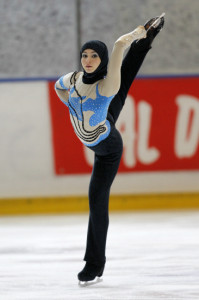 Her costumes are also always in line with Islamic tradition. While she is not able to compete in the 2014 Winter Olympic Games in Sochi, Russia, Zahra is ready to be the first figure skater to wear a hijab during the next World Championships and the 2018 Olympics in Pyeongchang, South Korea.

Zahra revealed that she decided she wanted to become an ice-skater, at the age of 11, after seeing the Disney movie, ‘Ice Princess,’ when she realized that skating can be a form of artistic expression. Now, she is called the ‘Ice Princess’ in her home country, where ice skating is not a typical sport.

Her father took her  to an ice skating rink, where she started taking lessons with Noemi Bedo, the Romanian head coach of the Zayed Sports City. In an interview the young figure skater recalls: “Initially, I was only coming on Thursdays for one hour, because it was ladies day. But Noemi stressed that I needed to come more often. She said she noticed that I had a natural ability for figure-skating, so she encouraged me to make a bigger commitment.”

Since then, she has been practicing twice a day, six days a week, as she is determined to reach her full potential. Zahra believes that, without her constant hard work, talent wouldn’t be enough. She gets up at 4:30am to practice before school and returns at 4pm to practice for one hour and a half. She likes to choose her own music for her routines.

Her father was initially reluctant to let her compete, as he believed that she would be dancing in front of a male audience. Her American-born mother eventually convinced him that Zahra was not only doing anything anti-Islamic, as she was covered up. She started taking part in national competitions.

Zahra’s first international competition was in 2012, when she skated in the junior category of the European Cup in Canazei, Italy. She finished in the top 15, which she is proud of, especially considering the fact that most of the other skaters had started much earlier than she had and they had already gained considerable competition experience.

In 2013, she was the only figure skater from the Gulf region to participate in the European Criterium Cup in Budapest, Hungary, where she won first place in one of the categories. In 2014, Zahra finished 12th in the Skating Union competition held in Slovakia, and is preparing to attend  the World Junior Figure Skating Championships competition in March 2014. For the future, she hopes to participate in more competitions, gain more experience and make her country proud.

Zahra’s example has inspired other young girls from her country to take up figure skating, so she hopes that ‘once I stop we do have other people who are going to compete internationally.’

The young figure skater also has high academic ambitions. She wishes to get a degree in Human Resource Management at Zayed University.

While some people in her country have questioned her passion for figure skating, Zahra has not doubted herself for one second: “I don’t listen to that. A girl doesn’t have to stay at home and do ­nothing.”

Zahra tries to be a good role model for other girls and young women in the Emirates and the Gulf region. In terms of advice, she once stressed: “I want to encourage girls to follow their dreams. Even though someone tells you that you can’t do something, if you love it, just go after it and work hard and your dreams will come true eventually.”