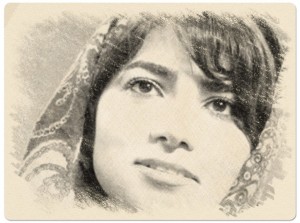 in his first 100 days of office, save the economy, and ensure that international sanctions were lifted by ending the nuclear standoff. November 25, 2013 marked the first 100 days of Rouhani’s presidency. While on the economic front, there have been some positive changes, Rouhani has done nothing to mend Iran’s dire human rights record. Most political prisoners and prisoners of conscience remain oppressed.  Not even students and young people have been spared of cruelty.

The first student to be put in prison after Rouhani’s election was Maryam Shafipour, a 25-year-old student at Qazvin University and a women’s rights activist.
She was sent to Evin prison, well-known for its political prisoners’ wing. She is accused of being a ‘threat to national security,’ a vague allegation in Iran broadly used against opposition members. According to Amnesty International, she is allegedly charged with having contacts with family members of the opposition leader, Mehdi Karroubi.

He was a presidential candidate in the controversial 2009 elections. Although won by Mahmoud Ahmadinejad, who claimed to have obtained over 60 percent of the vote, the elections were contested by the other contenders, including Karroubi, as having been rigged and filled with irregularities. Hundreds of thousands of Iranian cities showed their support for the opposition candidates by organizing post-electoral protests in the most massive anti-regime demonstrations, since the 1979 revolution.

During her interrogations, Maryam also allegedly stressed that the 2009 elections were rigged. In an interview for Safe World for Women, one of her friends suggested that her detention was prolonged “in an attempt to break her, but Maryam has not given up; on the contrary, she has a lot of strength and showed a lot of resistance, and she did not consent to the accusation and false charges.”

Maryam has already had her first court hearing on October 2013 in a Revolutionary Court in Tehran and remains in Evin Prison until the final verdict is reached. According to one of her friends, “there is no evidence against Maryam and she had not committed a crime, but in the Islamic Republic, lack of evidence is no reason not to arrest people.”

Maryam is a prisoner of conscience, as she is not allowed to freely follow her political opinions.

In 2010, Maryam had been given a one-year suspension by her University for political activities, as she was involved in the Female Students for Karroubi’s Presidential Campaign in 2009.

After her arrest, Maryam has not been allowed contact with the outside world, except to announce to her parents that she was moved to section 209, run by the Ministry of Intelligence, a week following her imprisonment. In 2009, three Belgian tourists were placed in the 209 ward on the accusation of espionage, while a British tourist, suspected of the same misconduct, suffered the same fate in 2010.

When visiting their daughter on September 16 at Evin, Maryam’s parents discovered that she had been transferred from ward 209 to an unnamed hospital. Prison authorities refused to reveal the hospital’s name and the conditions, which led to her hospitalization. She was eventually brought back and transferred to the women’s section of the prison.

While perfectly healthy before her arrest, Maryam has started complaining about her growing physical weakness, skin problems and tooth pain since entering Evin prison. Being held in solitary confinement, where she was beaten, had an even worse impact on her well-being.

Maryam’s imprisonment has also taken its toll on her family. Her parents have been threatened, while her family’s home has been inspected several times.

The young student’s friend believes that the international community can be Maryam’s voice and that publicizing any updates on her situation could help.