Eesha Khare: revolutionizing how we charge and use mobile devices

California native and eighteen-year-old Eesha Khare invented a super-capacitor, which acts as an energy storage and transfer device. The super-capacitor could revolutionize the way we charge and use mobile devices. Eesha’s device can last for 10,000 charge-recharge cycles, compared to the 1,000 cycles of conventional rechargeable batteries. 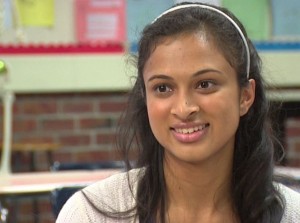 While so far, her device has only been used to power a LED light, the super-capacitor is anticipated to be able to power phones, cars and other equipment. With her invention a phone could charge in less than 30 seconds, instead of the several hours it takes right now. Due to its small size, the device is portable and could even be integrated inside cell phones, reducing and eventually eliminating the need for electric outlets.

Eesha used nano-chemistry to make such a powerful device so small.. She proudly described her invention, emphasizing: “It is also flexible, so it can be used in rollup displays and clothing and fabric. It has a lot of different applications and advantages over batteries in that sense.”

When asked what motivated her to invent the super-capacitor, she revealed being troubled by a simple, widespread problem: “My cell phone battery always dies.”

The young Californian was a runner-up at the 2013 Intel International Science and Engineering Fair, winning $50,000 for her invention. The winner of the competition was 19-year-old Romanian student, Ionut Budisteanu, who developed a model for a low-cost self-driving car that uses artificial intelligence.

Eesha intends to use the prize money to “pay for my college and also work on making scientific advancements.”

Because of her brilliant yet practical idea, Eesha has already started being courted by Google and some of the world’s biggest tech companies.

In an interview, Eesha revealed that the super-capacitor is just the beginning. She is ready to “set the world on fire” with her research and her inventions.