Two Young Activists are Arrested. Intentionally. “As Youth, Our Leadership Will be Crucial”–

UPDATE– NIYA’s Activism Continues. View the original article in the second half of this post.

Youth involved in NIYA or the National Immigration Youth Alliance 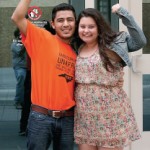 continue to fight for what they believe. Claudia Munoz, a 27 year-old member of NIYA, was intentionally arrested two months ago. A young woman who immigrated from Mexico to the US at age 16, Munoz explained her reasons for choosing to be arrested because of her undocumented status: “I’m the one who’s going to determine the moment when I’m detained, and the moment when I’m released. ”

Unlike most of their peers, Marco Saavredra, Mohammad Abdollahi, and Viridiana Martinez wanted in to the US prison system. In fact, Saavredra and Martinez actively tried to be arrested. Both young adults flaunted their undocumented status to Florida police last year in order to be locked up. This act of civil disobedience was not an adolescent prank or misstep, or pure stupidity,

but courageous activism. Though only in their 20’s, the three would use the arrest to impact something pressingly close to their and their families lives– immigration in the US.

All undocumented, Saavredra, Abdollahi and Martinez were brought to the US with their families as children. All soon realized the difficulty of living in the US as an undocumented immigrant. They ran into barriers pursuing higher education and kept their “illegal” status a secret even from friends.

The young activists decided they wanted to make a difference– not just for themselves, but for the growing number of the estimated 11.1 million undocumented immigrants in the US. The three decided to publicize immigrant detainee’s stories who were undocumented and awaiting deportation trials in low-security prisons. To intimately understand these stories, the youth needed to personally meet and interview undocumented persons in the immigration system. This required a way into the jail– the most direct route and their best hopes of hearing unfiltered versions of the detainee’s stories was to be arrested and detained themselves.

The three were not strangers to the immigration reform movement in the US. A number of large, youth-led immigration organizations have a palpable national presence. The three youth were originally members of United We Dream, the largest youth-led immigrant organization in the country. They worked with United We Dream on the DREAM Act, legislation that would create a pathway to citizenship for undocumented immigrants who came to the country as children. This legislation was defeated in congress in 2010. After this crushing disappointment, Martinez, Abdollahi, and Saavredra decided more drastic and confrontational tactics were needed to make real change.

“We got tired of advocates speaking for us,” says Abdollahi. “We wanted an autonomous voice. We said, ‘Let’s do this on our own and find the youth around the country. Let’s push forward.’”

The three formed the National Youth Immigration Association or NIYA to fight the deportation of immigrants who entered the country illegally.

“We have come to realize that, as youth, our leadership will be crucial to the future of our communities, and so we have taken it upon ourselves to lead this effort.” The NIYA webpage declares.

NIYA believes acts of civil disobedience are sometimes necessary to create change. The acts did not just draw attention to their cause, but allowed the activists to “infiltrate” security centers where illegal immigrants were detained pending trial. Publicizing these largely unheard stories could be a powerful tool. As Dreamers, or undocumented immigrants brought to the country as children, have discovered, telling their story can have a huge effect on the national immigration debate. The three had to get arrested to meet with detainees who had little other hope of having their story told nationally.

The activists wanted to help those in Broward without a criminal record. How? First, find a way into the detention center. Martinez would be placed in the Broward’s female sector and Saavredra in the male one. Abdollahi would coordinate and publicize from the outside. After nicely harassing a few Florida police men, the young adults’ undocumented status was discovered. They were arrested and sent to Broward. Martinez and Saavredra had to coax their fellow inmates to tell their stories. Many were reluctant or confused by the eager, young adults’ purpose. But, finally a few inmates explained how they ended up in Broward.

One woman, who was arrested on questionable charges, was eligible to be released on bond from Broward. She had three children at home and had received inadequate medical treatment after an injury in the detention center caused by a former rape. The woman was worried about going public, but Martinez convinced her. Abdollahi then publicized the story online and Martinez called reporters from inside the detention facility. The three activists created a minor sensation. A month later, an immigration officer came to the woman’s room and told her she was being released.

Overall, NIYA says they have impacted 40-60 immigration cases. Further, more immigrants at Broward are having their trials brought before a judge. Before Martinez and Saavedra infiltrated the prison their might be two cases before a judge a day; now their are closer to 25.

Though in their 20’s, these activists’ palpable impact seems to drive them to fight harder for their cause, not relax.

Last Black Friday, NIYA protested Walmart’s treatment of its workers by staging a “Walk Out.” However, their main focus is still the deportation of undocumented immigrants. They are training more activists to “infiltrate,” demonstrating for immigration reform and staging acts of civil disobedience.

While held at Broward, Martinez told DemocracyNow!, “What the undocumented youth movement has taught us is to look out for each other… that’s what has gotten us to be able to stop many deportations in the past, to stop deportations now, and it’s what’s going to push to the future.”