When he was 14-years-old, William LeGate developed an iPhone application called Fake-A-Text, which received over one million hits and was featured in the New York Times. The app, which continues to top the charts in its category, allows its users to send fake texts messaged to the iPhone or iPhod Touch and has mostly been used in pulling pranks on other people.

This was not his first experience in online entrepreneurship. William reveals that he started an Internet blog when he was in 6th grade and “started making money from it through advertising. About a year later, I began to buy and sell iPods on eBay making a hefty profit.”

At the age of 14, he started teaching himself programming by watching Stanford lectures and learned how to develop an app through YouTube videos.  He was determined to make hit apps, so he also taught himself additional skills, such as marketing and SEO and using Photoshop. 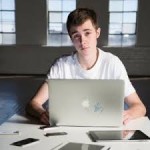 His first app, Now News, an iPhone news browser, reached No. 9 in its category on the first day of launch.  When he was in the 8th grade, the young entrepreneur started an iPhone app development company, called Imagination Research Labs. He subsequently created Game Giveaway, an iPhone App that offers its users new high quality paid games for a 24-hour period without obligation and allows developers to promote their games. It ranked 2nd in the Top 25 Free iPhone App, with 100,000 downloads in just 24 hours, with rate of almost three hits per second. William, currently 18, described Game Giveaway as a “Groupon for the mobile-gaming environment, except that it’s free.”

Until now, William has already created over 15 mobile apps, downloaded more than 5 million times and currently used by 1 in 16 American teens. His current daily revenue is over $4,000, from which he manages to pay several adult employees.

He has often been dubbed as the next Bill Gates or Mark Zuckerberg. In 2013, he was accepted as a Thiel Fellow and he will receive $ 100,000 for the upcoming two years to not attend college, but focus instead on developing his business. He announced that during his fellowship, he aims to change the way that we discover apps for things around us.

In terms of his career plans, the young entrepreneur emphasized he would like to start a technology-related company. He confessed that he wants to “be an entrepreneur. Work for myself.”

While already a successful entrepreneur, William also likes to give back to his community. With his church, he participated in numerous charitable activities, such as volunteering at “shelters for abused women and children and helping prepare food for MUST ministries.” During one of his high-school’s spring breaks, he went to the Bahamas with his church’s youth group to “build homes at an AIDS camp, repaint a retirement home for the elderly, and play with children at a home for kids whose parents had abandoned them or who have severe disabilities.”