In 2009, then 14-year-old Laetitia Mukungu started in her grandparents’ village the Women’s Rabbit Association (WRA), a cooperative organization that farms rabbits to help local women led decent lives and pay for their children’s educational needs. The rabbits are sold to Kenyan restaurants for meat. 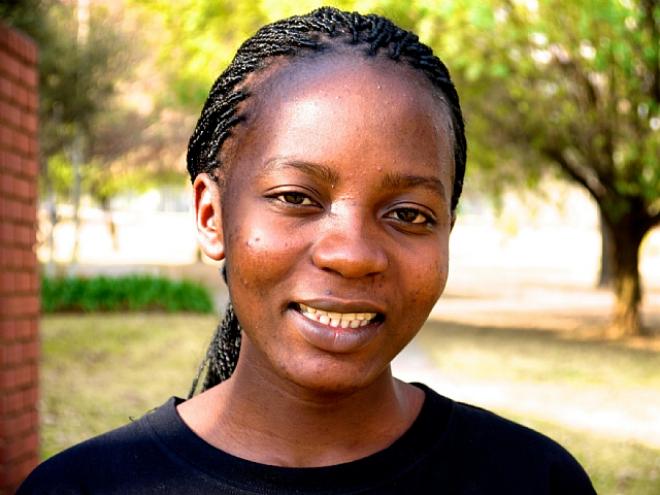 The teenager’s decision to start the business was directly linked with unexpected changes in her life. After completing her primary education at Nairobi Primary School in the Kenyan capital, where her mother, the main breadwinner, lived and worked, Laetitia was admitted to attend Precious Blood Girls’ School Riruta. She could not afford the fees, given that her mother had lost her job.

Laetitia decided to return to her grandparents’ village and be a tutor in Maths, English and Science at the Bukura Educational Complex, a local primary school in her village. It was then that she discovered “the problems that these children faced: lack of school fees like me at that moment, uniform and adequate stationery.”

She decided to create an income-generating project to support the kids in the school. The teenager started by researching potential business options. She soon discovered that rabbit meat was high in demand, but the supply was low. She also found that rabbits are “most productive of domestic livestock. Their gestation period is only 30 days and a female rabbit on average, gives birth to 42 young ones per year, they are very cheap and easy to feed as they only feed on grass and water, they occupy little space hence suitable for most rural farmers who are small scale, they are quiet animals that can be raised in any environment even in a school, they rarely get sick unless kept in unhygienic conditions thus appropriate for rural women who have no money to spend on disease treatment and their meat is white, high in protein and low in fat and cholesterol.”

She realized that rabbit breeding would be a perfect enterprise, since it “is not complicated and requires no professional skills, which makes it suitable for rural women who are largely uneducated. It is also very convenient for the women’s location because there are enough resources in terms of land and rabbit food (green vegetation) in the rural areas.”

In order to start her business, she needed funds. Laetitia went to the head teacher of the school where she was tutoring and told him about her idea. He agreed to lend her 40, 000 shillings, or around $500.

She also wanted a strong team of women to join her project. In order to do so, the girl would “follow the children to their homes so that I could talk to their parents. I explained to them why they needed to join and work with me on this project because it would eventually improve their lives.” She further adds: “I had major problems trying to explain to them how keeping rabbits can help their lives. Besides, they would look at me as ‘this small girl’ so I had to keep educating them to open their eyes further.”

With the received funds from the head teacher, the young girl build a rabbit hutch and bought 15 rabbits, 10 female and 5 male. The project currently produces around 200 rabbits each year. The girl emphasized that the 15 women that joined rapidly “gained knowledge and skills in rabbit farming and now are able to carry out the feeding, breeding, manage disease and treatment and sell the rabbits.”

Through the revenue raised, the WRA promotes education, by supporting 12 “under-privileged students in the school in terms of school fees payment, buying of stationery and uniform to ensure they are comfortable and able to stay in school,”  as well as food security, by buying “maize and vegetable seeds that are grown on the women’s farms for subsistence.” The teenager adds: “In total we have 3 acres of land and 1 acre of land produces 15bags of maize on average. On the farm we use rabbit droppings as organic manure and rabbit urine as an organic pesticide. Since we began we have harvested 600 bags of maize.”

Laetitia also used some of the revenue from the business to launch a micro-finance bank to lent to the village women who wished to initiate their own small businesses, such as selling fish and fruits, at a fair interest rate. The young girl reveals: “I lend the women from 5,000 shillings to 10,000 and they repay within a year, with an interest of 500.”

Laetitia has a successful business that she is passionate about and that is personally rewarding. She says: “My goal to touch and transform the lives of women in my community gave me the joy to go on. The majority of these women are poor, single and jobless. Single parenting for these women is a huge challenge as they have to deal with the emotional toll of bringing up the children while supporting the family financially.” She explains that, for her, the most “exciting thing about what I do is when the women I work with say, ‘Thank you our child for being born in this community.’ Knowing that they are so grateful for my help excites my heart. It affirms me that I’m on the right path and able to put a smile on someone’s face.”

In terms of short-term goals, the teenager mentions: “I want to see the project breed up to 800 rabbits every year, up from 600. I also want to get my own slaughterhouse so that I can sell the rabbit fur to bring in an extra income.”

Laetitia’s long-term objective is that, through the sale of rabbit meat and by-products, she will become “the largest rabbit producer in Kenya and use the profits generated to create a Kenya with 20,000 economically empowered rural women who are bold, confident and self-sustainable by 2033.”

When advising other young people to start their own business, Laetitia emphasizes: “[…] no business is less important. Its success will depend on your passion, motivation andambition. Don’t only focus on making profit and getting rich. Let your business have a social effect. Touch someone’s life. Put a smile on someone’s face. Always do what you love because you will still love it when it threatens to collapse. There’s nothing important in business like developing and maintaining a diverse network. You need connections!’

For her incredible work, in 2012, Laetitia was selected as one of the 13 finalists for the Anzisha Prize.