Neha  Juneja, a  27 year-old Indian entrepreneur, is the co-founder and CEO of Greenway Grameen Infra, a company, whose first product, the Smart Stove, has the potential to revolutionize the cooking process and bring a fundamental change in rural households. 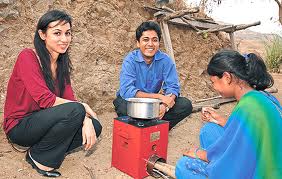 The Smart Stove burns biomass with incredible efficiency, while cutting smoke emissions by 80 percent and fuel consumption by 65 percent in comparison to traditional mud cookstoves. The stove can be operated with biomass based fuels such as cow dung, agro-waste, wood, and charcoal, and can be used for all kinds of cooking, including baking and frying.

Neha reveals that her motivation to create her company was the desire to bring immediate and significant positive impact on rural lifestyles, where Indian women are still preparing meals three times a day on dangerous stoves. These stoves posed grave health and environmental hazards. Another keen incentive for creating the company was the belief that the lack of appropriate products exacerbates poverty, especially in rural India.

The young entrepreneur further confesses that she draws her inspiration from the women “we meet or sell to that manage their homes, work, and manage to do so many great things.  It’s inspiring to see them live their lives while doing so much hard work, still do so many great things, and still have so much joy.”

The Smart Stove’s creation process was done in collaboration with multiple user communities from five Indian states spanning over 150,000 kilometers, where the design team, consisting of eight people including the co-founders,  lived and worked to obtain locals’ inputs, align their technical goals with actual user requirements as well as to empower rural users to ascertain changes and be responsible for the product’s attributes.

Even before  co-founding the company, Neha was involved in organizing community-led projects and need-analysis consulting in  areas ranging from primary energy supply to water access. She was also named 2010’s Brightest Young Climate Leader by the Hindustan Times & British Council. Nevertheless, the Greenway Grameen Infra has allowed Neha to combine her passion for protecting the environment with her ability for designing talent for product design.

In 2012, Neha’s company won the Grand Prize at the Intel Global Challenge at Haas School of Business, University of California, Berkeley, receiving $50,000 among more than 150,000 students from over 50 countries. The Greenway Grameen Infra was also featured as one of Fast Company’s “Top 14 Design Stories of 2012,” while also being selected for the 2013 Unreasonable Institute, where promising entrepreneurs pitch to potential funders and receive intensive consulting support for six months.