Jennifer Kamara grew up in Sierra Leone knowing the consequences of conflict. Throughout the early years of her life, the now 24-year-old Jennifer experienced the decade-long conflict that ravaged her country and tore apart its infrastructure and institutions. After the conflict ended, much rebuilding was necessary to re-establish the infrastructure and economy. 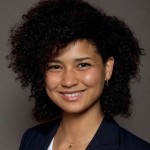 Because of the conflict’s duration and the extent of the damage it caused, Sierra Leone is still in the process of recovering.  One major consequence of the conflict was the suffering of the health infrastructure and institutions in the country. Without access to basic health care, many people die in Sierra Leone from what should be treatable diseases, such as pneumonia, nutritional deficiencies, and diarrhoeal diseases. Jennifer mentions in a blog post for the Huffington Post that as of 2014, Sierra Leone had the fourth highest maternal mortality rate. The main reason for lack of care is that people are either too poor to afford health services, or live in regions where health services are scarcely available.

The daughter of a doctor, Jennifer was taught early on the importance of access to health care for individuals as well as for communities to allow people to focus on education and productive activities that promote development. She grew up sensitive to the fact that so many of her co-nationals lack access to health care and wishing to enable them to have access to it. However, without the funds or connections to build an organization, Jennifer did not immediately start to fulfil her dream. It was not until her tour through the Bamoi community in northern Sierra Leone in 2013 that she decided not to let her doubts prevent her from pursuing health equity for Sierra Leone.

When Jennifer visited the Bamoi Community, which is home to 25,000 people, she learned that residents must travel two hours to reach the closest hospital in the area. Because of this, several people in the area were not getting the treatment they needed to live healthy lives. When Jennifer unsuccessfully tried to persuade health organizations to work in Bamoi, she decided to act herself.  Jennifer reached out and put together a group of health workers and a doctor to address the health needs of those in the village. A few months after Jennifer put together this team, and with the help of her friends, family, and employer at the time, a pharmaceutical company called Novartis, she officially created World Health Equity (WHE) in 2013.

WHE aims to eliminate gaps in access to health care in Sierra Leone and around the world. Headquartered in Massachusetts, the organization works currently to continue providing health care for Bamoi residents. In the short time WHE has been set up, it has successfully provided health care to 25,000 people that otherwise would be lacking it, and also treated 2,500 in the past year alone. Additionally, WHE is teaming with Project Hope to implement a baby box program that provides new families with a few essentials needed to care for their new-born, such as baby wipes, blankets, and baby clothes. As the Ebola virus created a health crisis in West Africa, WHE also started a program to support health workers all over Sierra Leone by providing them with protective gear so that they can better serve communities in need.

The remarkable efforts and achievements that Jennifer has made with WHE allowed her to be an ambassador and delegate speaker for the 2014 One Young World Summit. Her speech at the summit made clear her dedication and passion for conflict resolution, ending health inequity around the world, and encouraging young people to follow their own passions to make a positive change in the world.

While WHE is still a young organization, the impact it has had with its current programs is outstanding, and even more impressive when considering her tumultuous background in conflict-ridden Sierra Leone.

In order to move forward with her aspirations to eliminate health inequity, Jennifer challenges millennials to get involved. She encourages those with ideas to believe in themselves and pursue them. In her own words in a blog for the Huffington Post, “I am not saying millennials should be obligated a seat at the table. I am challenging millennials who care deeply about a purpose to work hard and responsibly at it”. Jennifer encourages young people to get involved in whatever capacity they can to make a difference.

As for her future plans, Jennifer has plans to attend medical school to be able to get even more involved in the health care industry and spread access worldwide. If great successes and achievements that Jennifer has made thus far are an indication, the young changemaker will have an even bigger impact in the years to come.