Since the United Kingdom returned control of Hong Kong to the People’s Republic of China (PRC) in 1997, the former colony has been experiencing a political-cultural identity crisis. Under the “one country, two systems” policy, the island’s government has grown more and more economically reliant on—and politically controlled by—Mainland China, while the people, on the other hand, identify increasingly with neither.

Last fall, in response to a decision made by the Standing Committee of the National People’s Congress to keep electoral power in the hands of few, hundreds of thousands of Hongkongers took to the streets to protest for free elections.

The Standing Committee’s decision allows for universal suffrage in Hong Kong, but only under the condition that an Election Committee made up of corporate representatives and government officials first nominate the candidates. The Standing Committee also retains the final say on the Chief Executive.

Demonstrations went on for nearly three months, and at times amassed hundreds of thousands of protestors fed up with their lack of political inclusion. The protests became known as the Umbrella Movement in reference to umbrellas used in defense against tear gas sprayed by police. Police brutality triggered thousands more to join in the Movement. 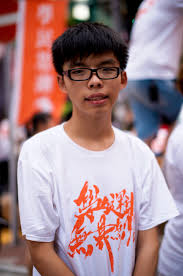 Among the throngs of demonstrators, one 17-year-old (now 18-year-old) activist, Joshua Wong, emerged as a leading voice. As the leader of Scholarism, a non-violent student activist group, Joshua organized a class boycott and demonstrations, spoke at rallies, and drafted a charter to appeal the Standing Committee’s decision. On December 1, Joshua also began a four-day-long hunger strike to put pressure on the government to open a public dialogue on the electoral process. For his courageous organizing and demonstrating, Joshua was named one of the most influential teens of 2014 by Time Magazine.

Despite Joshua’s enormous personal contributions to the Umbrella Movement, in the end, it’s the thousands of other demonstrators, many of them also students, who only through collective effort have enough power to affect change in their government.

Although the Movement came to its conclusion in mid-December without achieving its goal for free and fair elections, it did inspire an entire generation to take action against its government. And for the many newly engaged citizens, the fight for democracy has just begun. Because of young activists like Joshua Wong taking on their giant government, there is hope for a free and democratic Hong Kong.