Jules Quinn: Tackling Tea One Cup at a Time

There are few people who stick to their childhood career dreams, but in the case of Jules Quinn of the TeaShed, it’s safe to say she hasn’t ever wavered from her plan of running her own business. Starting with smaller projects from the age 14 like selling bracelets and running a catering service, Jules has always liked the idea of working for herself. 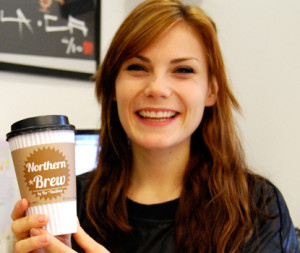 As part of Jules Fashion and Marketing degree in 2012 at Northumbria University United Kingdom, she was required to build and plan a virtual business. This project would eventually lead her to create the now well established TeaShed, but it wasn’t until Jules was working as an intern in London that the idea came to her.

As most interns find out, the starting point of a career is often focused around making tea for other people and it was during a trip to the local supermarket that the brainwave for the TeaShed occurred to her.

Tasked with selecting some interesting tea by her supervisor, Jules noticed the surprising difference between the tea and coffee industry. Whilst coffee has become a fashionable drink in which there are seemingly infinite blends and styles, tea is much less explored.  Intrigued, Jules began to research the tea market as it stood and decided to make tea the focus of her virtual business.

For Jules, the unique selling point of the TeaShed was about making tea just as exciting as coffee, not only in its selection but its marketing too. The tea ranges offered by the TeaShed were designed to come in a recyclable paper cup rather than a box to be thrown away and the tea leaves were to be contained in pyramid shaped bags to maximise the flavour. The most original  concept of the TeaShed however was about making tea interesting and something to experiment with, offering luxury and exotic flavours that would challenge the traditional notion of tea.

Spotting this hole in the market proved to be the first step to success for Jules and a year after graduating she began to launch her products into local stores. Winning a University prize of £1,500 for the creation of her business, a regional competition for £5,000 not to mention the Shell Livewire competition, gave Jules the collateral she needed to turn the concept of the TeaShed into a reality.

It was in 2012 however that the TeaShed branched out into a whole new territory and was approached by John Lewis. Today the TeaShed supplies to John Lewis nationwide as well as the V&A museum and Heals. Jules has since progressed to also supply iced tea, mugs, tea towels and gift sets.

Now in 2014, the Teashed has become bigger than ever and Jules has become an example for small businesses everywhere. In June she was invited to attend the SAGE Makegood Festival in London. Speaking on the Business of Food panel Jules was able to offer her insight on brand marketing and finances, as well as to identify the problems that younger entrepreneurs face when it comes to cash flow. Jules was also able to give her views on USP (unique selling proposition) and the importance of having a story behind your company.

The TeaShed is estimated to generate £250,000 in revenue this year and Jules has also recently secured a deal to launch a series of TeaShed shops in Japan. She frequently flies to Asia to sample tea leaves and continue the quest for exciting new blends. Where she will go next is anyone’s guess but without a doubt Jules has the world of tea covered.