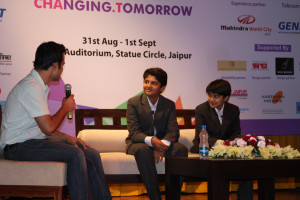 Their interests in computers started early, when they started using Paint at school. Soon, they mastered Photoshop and their father started teaching them QBasic, a basic programming language, four years ago. Avid mobile game players, they decided to design a game application themselves. The game application, Catch-me-Cop, was born.

Catch-me-Cop is based on the popular game of chor-police of India, where the thief runs from the police who has to catch him. Giving a digital twist to the game, the Kumarans released the free app for Apple devices. When the app was finished, they decided to publish it under a company’s name.

The siblings therefore founded a company called Go Dimensions. Their aim is to get 50 percent of smart-phones of the world to use their apps and they want to achieve it within two years. The CEO of the company, Sanjay, defines the road map of the company and marketing strategies, while the president of the company, Sharavan, is responsible for company’s technical direction and determining how to make more profits. However, these roles are not restricted and the two brothers both share their thoughts and then take a decision.

Their app had more than 18,000 downloads in 42 countries, a fact which blew them away. They have also received offers from foreign companies in countries including China and the US, for partnership and developing apps for Androids.

They credit their father for teaching them programming. They now know four languages -Q Basic, XML, Objective C and a bit of Java. Taking inspiration from Steve Jobs and Bill Gates, they also decided to submit 15 percent of their revenue, received mainly form advertisements, to charities. While their income currently isn’t much, they give lunch and free books to a local charity.

Having developed seven applications for IOS and three for android, they decided to venture in this market when they noticed that people always carry their mobiles wherever they go, and that the market had fewer applications for children. Meeting the ex-president of India, Dr ABJ Abdul Kalam, is their best personal achievement so far. They live in a close-knit family and do an hour of programming every day.

Whenever a new app idea strikes, they both discuss it and the ways of implementing it. Sanjay then completes the whole design and they split the profits made. They rarely fight, but each claim the other to be the naughtier sibling. Fights usually last only a few minutes.

Sanjay and Sharavan have ambitious upcoming plans, which include creating GoMap -,a powerful map which can show live traffic and information on pollution and GoCard, a mobile application generating and sending birthday, anniversary or other cards for friends and family. They wish for better infrastructure in India, including proper roads connecting all parts of India, faster Internet and second-tier cities. They also want to try their hand on crowd-sourcing. Experiences shared by their parents helped them be better equipped to deal with the industry, since their father is the Director of Symantec, which builds Norton Anti Virus. Their message for the young people is to do what they love and are passionate about, and not become engineers to make money.