At the age of 14, William Kamkwamba, from a small Malawian village,built an electricity-producing windmill  using only PVC pipe, a tractor fan, 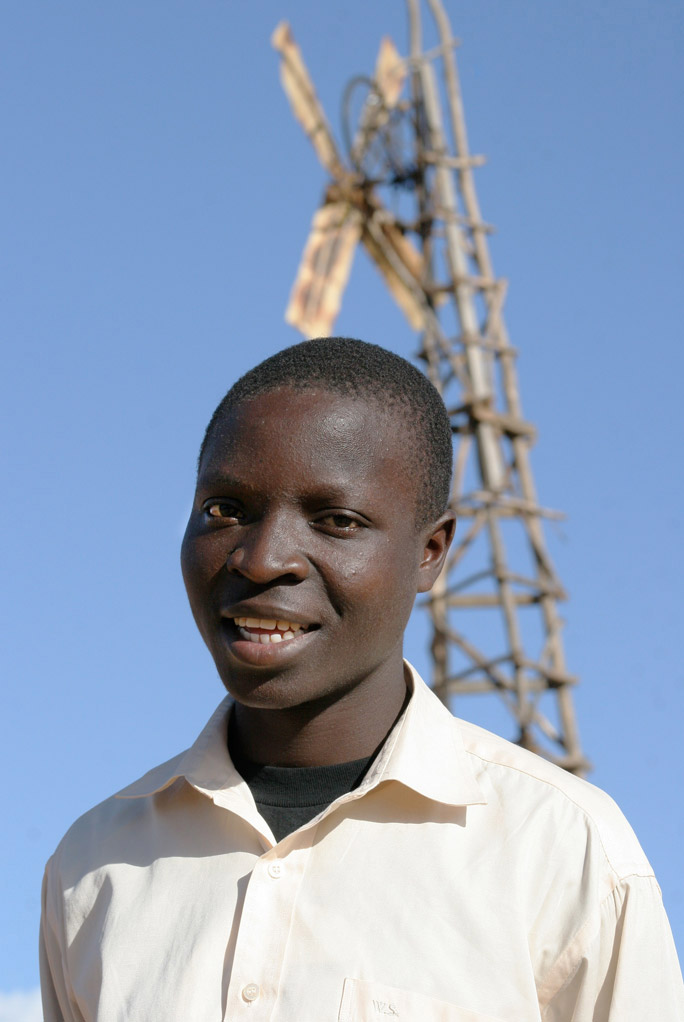 an old bicycle frame, and tree branches. The windmill powered the  four lights and two radios in his home. He achieved this in a country, where only 2 percent of the population has access to electricity. He subsequently built a second windmill to pump water for a family garden.

William was fascinated with electricity since the age of twelve, when, alongside his cousin, he started repairing radios and tinkering with bicycle dynamos, hoping to understand the inner workings of generators. During a terrible famine in 2001-2, William was forced to drop out of school, but continued his education by visiting a library situated near his village. He got the idea of building a windmill after seeing windmills on the cover of an 8th-grade science book, which he had borrowed from the library. He considers himself fortunate to have had access to a library, since “most schools don’t even have enough books for their students. In my primary school, there was one book for five children. We always had to share, so you hoped you read at the same level as your friend. This library at my primary school was special. It was funded by US AID through American Institutes for Research and the International Book Bank, working with a local NGO called Malawi Teacher Training Activity. These were mostly donated books. Textbooks and a few novels.”

The windmill construction wasn’t supported by William’s family,only by some friends. However, he believed in himself  and in his idea, and kept studying the illustration of a windmill in his book. He reasoned if someone else was able to build the machine, he too was capable.

Recalling his villagers reaction after he finished the windmill, the young entrepreneur reminisces that they said: “‘Ah, we just thought you were crazy because we had never seen such a thing in our lives!’ When I told them I was building a windmill, they had no idea what a windmill was. I also think people thought I was crazy because I was going into the junkyard, looking through the garbage.”

Nevertheless, people saw the windmill’s immediate benefits, as they began using it to charge their mobile phones for free. Another crucial benefit from the windmill was that his family stopped using kerosene for light, since those lamps produced thick, black smoke that made everyone cough and made my sisters sick. (Those lights) were a serious problem.”

The young entrepreneur mentions: “The most difficult part was finding materials to use. Another difficult part was after I had managed to build everything and I was supposed to actually lift the tower up – it required very hard work. I got my cousin and friend to help me to lift it up. The other challenge was because people didn’t believe me. They would always be laughing at me, thinking I’m going crazy.”

His invention was discovered and covered in local news outlets in 2007. After reading about William on a blog, TEDGlobal Conference Director, Emeka Okafor, spent several weeks searching to find him and invite him to attend TEDGlobal on a fellowship. After his TEDTalk and his front-page feature on the Wall Street Journal, the young Malawian received incredible international support, allowing him to return to school as well as to complete some other projects that he envisioned for his community,including a solar-powered water pump supplying clean water in his village, a water well drill to pump water from deeper spots, and a drip irrigation system to protect his family from future drought.

The Ted Talk was the first time William saw the Internet.  He recalls: “I had heard about the Internet on the radio. People were saying many things about it. But I had no idea about what it could do. So, when Tom told me I could find any information on the Internet, the first thing I did was search Google for windmills. I was amazed that I could find pictures and information — even instructions about how to build windmills. When I built my windmill I just used a book with pictures! I was amazed. Everything I needed to learn had been hidden in the Internet the whole time!”

After TED, William was invited to speak at the World Economic Forum, the Aspen Ideas Festival and Maker Faire Africa. He has met and discussed with the likes of Al Gore, Bono, and Larry Page. He has also inspired a documentary, entitled William and the Windmill, which won the Documentary Feature Grand Jury award at SXSW in 2013. William has also written an autobiography, The Boy Who Harnessed the Wind. He says that the reason for writing the book was: “I feel that there are so many people in my area or in the world who have great ideas but because of the circumstances they are not able to continue with their ideas.” He continues: “I wanted to share my story with them so that maybe it would be able to inspire them to achieve their dreams.”

William is currently majoring in environmental studies and minoring in engineering at Dartmouth University in the U.S. He is active in the Dartmouth Humanitarian Engineering program, which undertakes engineering projects that help improve communities in need. The program recently traveled to Tanzania and Rwanda to help install stoves, create water turbines, and produce wind power for local communities.

After graduation, William plans to return to his village and use his Dartmouth education to create new energy resources for his village and his country. He is currently working on installing solar panels in some Malawi primary schools to allow students to use computers and give light for late night reading.

His advice to other young aspiring entrepreneurs, especially those from similar backgrounds as his, William stresses: “I would tell most young people that in life you can go through many difficulties, but if you know what you want to do, if you can focus, and work, then in the end, you will end up doing it. No matter what happens, if you don’t give up, you will still succeed. People can say all kinds of things, but if you know what you’re doing, in the end, you will do it. Everything is possible.”

You can support William and his work at MovingWindmills.org.