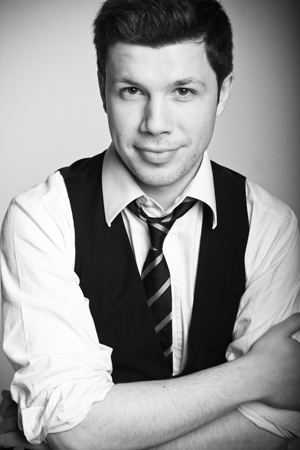 The basic idea came to him, while he was on a plane, watching an animation movie on his laptop. The little girl sitting next him also wanted to watch. So, he offered her a headphone and they started watching the movie together. Soon enough, the girl started touching the characters on screen, wanting to interact with them.

Emi immediately started realizing the potential that interactive videos and advertisements held, especially considering the rise in watching videos on handheld devices. Wanting to explore further that field, he created Brainient in 2008.  According to Emi,  his company makes videos from “a lean-back ­experience, to a lean-forward one.”

The company was originally based in Bucharest. Emi knew it would not remain there for long, since, in order to achieve a larger-scale impact, as he wished, he needed a wider market and agencies with a keen interest in the latest technologies. His company was selected as one of the six winners of the UK early-stage start-up competition Seedcamp, aiming to encourage entrepreneurial talent in Europe, winning €50,000 and joining the global entrepreneur program run by UK Trade and Investment.

Since moving to London, which he considers his most effective business decision, the young Romanian entrepreneur has managed to secure over $3m (£1.9m) in funding from venture capital and angel investors in the UK and US, which include a $1.8m fund-raising earlier this year.  Nevertheless, while Emi might have moved to London, his technical team of programmers and developers remain in Bucharest, thus allowing the company to expand without having to sell such a large portion of the business.

Brainient is a highly innovative and forward-looking enterprise. The company’s “Layered Brain” platform allows creators of Internet-based video ads to insert interactive features. An interactive ad could be a button on the video that takes the viewer to a Facebook page, shows behind-the-scenes footage, or play a game related to the video you were watching.

Currently, Brainient has over 100 global clients, including Coca-Cola, Volvo, the Pirates of the Caribbean franchise, which run, on average, 50 Brainient-powered campaigns every month. He has also created the first XBOX Kinect-compatible gesture-activated trailer for the Hobbit. Brainient was the first company to develop the technology replicating the user behaviour of an XBOX Kinect game. Through hand gestures, people can “swipe, zoom-in, zoom-out or wave in order to interact with the video. Viewers  can also find out more about the movie, read the cast’s biographies, watch ‘making of’ videos or flip through a photo gallery for ‘The Hobbit.'”

Brainient’s data analyses reveal that viewers watch an ad for twice as long when it is interactive and 10 percent of people click to watch the videos, compared to only one percent for non-interactive ads.

One of Emi’s main current challenges is determining ad companies to adapt their videos for different devices, including TV, tablets or mobile phones, since people’s behavior toward ads varies when using these various devices. Nevertheless, the young entrepreneur is optimistic: “Over the next five years, the TVs people buy will be connected to the internet, and they’ll have an IP address so advertisers will know far more about consumers than they currently do.” He adds: “As long as they’re connected, for advertisers it doesn’t really matter what they’re using to watch.”

In terms of current plans, Emi is focusing on transforming the company from a small start-up into a proper company, by hiring more sales and marketing staff and opening an office in New York. He also aims to hire more people across the U.S. and Europe.

While Brainient may be his biggest  and most successful enterprise, Emi has been conducting business since an early age. When he was 10 years-old, he started making sets of business cards for his teachers. By 15, he got his first job at a company focused on creating websites. When he was 18, Emi created his first company, from his parents’ house. The young Romanian prides himself with creating the first online television in Romania, Brain TV, the first real estate search engine, called Vertimo, and the first music streaming service, eOk.

Apart from leading Brainient, Emi also sits on the board of a $3 million initiative,the Digital Catalyst Fund (DCF), based in Bucharest, an investment committee selecting early-stage start-up companies in the UK and elsewhere that receive funding and three months’ access to a preselected technical advisor in Romania. At the end of the three months, the start-up founders should have a working prototype and the DCF may choose to invest $25,000 to $100,000, if deeming the prototype to have potential.

In terms of the DCF’s main aims, Emi stresses: “We want to create – under one roof – a community of local tech experts, programmers, and developers with well-structured start-up projects, and to help bring their ideas to life and turn them into profitable entities.” This would solve some of the key problems facing start-ups: access to low-cost developer talent and finding adequate technical partners with whom to market the ideas.

When advising other young entrepreneurs to start a business, Emi stresses: “The harder you work, the luckier you get.”  He adds that, in order to be a great entrepreneur, it is important  to be ambitious, courageous and intelligent and have a bit of luck.