In 2009, while in her first year of law school in San Francisco, then 22 year-old Kyle Smitley created barley&birch, an organic children’s clothing company, which has become popular with celebrity moms like Jessica Alba and Sheryl Crow and has been featured in OK! and Us Weekly. 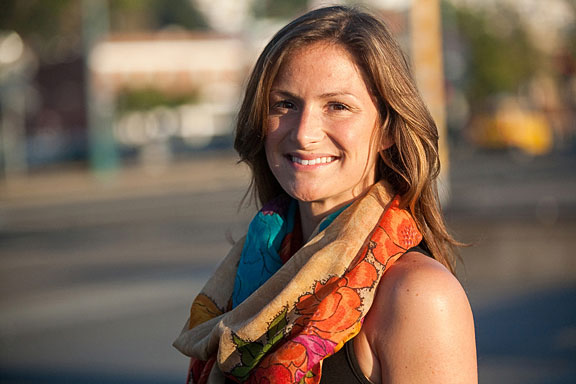 She originally got her business idea in 2007. While doing an unpaid summer internship at the White House after finishing college, Kyle was also conducting side research for the owner of a clothing boutique that was interested in finding out whether the natural children’s products industry claiming to create organic products truly did so. She discovered that there was a lot of deception in the apparel corner of the industry, given that many of the companies forgot to specify that their products were dyed using heavy metals and sewn in sweatshops.

She also discovered that most clothing, especially for children, is produced with substantial harsh chemicals and metals linked to asthma, hormonal defects, eczema as well as other skin conditions. The young entrepreneur stressed that, since kids always chew on their clothing, these detrimental elements enter their bodies. In fact, kids’ bloods tests are revealing chemicals that were completely absent from children’s systems 10 years ago.

Kyle decided to make a difference and offer parents and children “the safest and most environmentally friendly clothing possible.” As a result, every single facet of the clothing line she created is carbon neutral. She stresses: “Not only do we offset any emissions created by production and shipping, but we work with manufacturers and suppliers that are largely powered by solar energy. We chose only certified organic cotton and water-based inks, so we do not pollute the air and water with chemicals. We are made in the United States, so we do not emit the massive amount of carbon associated with trans-ocean shipping. We are largely paper-free and any paper involved with the line is 100% post-consumer recycled. Essentially, we chose to go beyond the level of convenience to be fair to our planet and to our customers.”

Kyle was also determined to create her company in order to help improve the global community. The company currently donates at least 15 percent of its proceeds “to a variety of organizations working all over the world to improve the lives of others. We fund everything from educating rural farmers on sustainable agriculture to providing shelter to victims of abuse.”  In 2011, the young entrepreneur decided to take one step further, by creating a non-profit organization, called the barley&birch foundation. One of the first initiatives of the foundation was to construct an orphanage in Haiti.Kyle reveals:  “The orphanage in Haiti runs off of $500 a month. It’s a home that feeds, clothes, and pays for someone to look after and keep the building and guard it because it’s in an unsafe area and it’s for 20 kids.”

While her company’s current success may be rewarding, Kyle’s road to achieving it was paved with challenges. In 2008, she took a gap year in order to create a business structure. Her first major obstacle was finding a bank to lend her the $10,000, since, despite her flawless credit, Kyle was turned down at every bank she contacted. She finally found Accion, a microfinancing organization that agreed to provide her the loan. Kyle recalls: “What I liked was that the interest I paid went to funding other loans and not to a large corporate bank.”

Loan money in hand, she hired a children’s clothing designer to help her produce t-shirts, onesies and pants. She then launched a major marketing campaign, sending 500 hand-signed letters with sales sheets to environmentally-responsible stores. Amused, she recalled:  “I felt like, ‘We’re so cool, we’ll sell out in 48 hours!’” Since that did not happen, she reached out to mom bloggers and their websites, from which she received a positive response, including from DailyCandy and Cool Mom Picks. The support received from the blogger moms played a key role in ensuring that retailers would display and sell her products. Since then, barley&birch has been successful selling its products online and in over 30 stores. At the end of 2009, the young entrepreneur’s company reached $500,000 in annual sales.

Some other challenges that the young entrepreneur faced when starting her company were creating a strong and consistent brand identity and website as well as balancing her law school work with managing her business. She revealed that she never has enough time and often does not sleep. For her innovative work, the young entrepreneur has received numerous awards. She was named one of the 25 Most Powerful Women Entrepreneurs in Fortune Magazine and one of Inc. Magazine’s Top Coolest Entrepreneurs Under 30. The Huffington Post also selected her in 2011 as their “Greatest Person of the Day.”

In terms of her upcoming plans, Kyle mentions: “I want it to keep growing. I think we are really close to hitting $3 million in annual sales so I’d like to keep growing up on that,” she said. “We’re launching another company in the next six months and going to be opening a brick-and-mortar location. We’re strictly online and our stuff is at other brick-and-mortar locations across the country, but we don’t have our own, which I think will be really exciting.”

When advising other young entrepreneurs to pursue their business, Kyle stressed that “hard work, a high quality product, and a belief in your mission will get you wherever you want to go.”  She also recommends “being realistic with your budget, to give yourself enough working capital to stay in business while your plan gains momentum. Budgeting/paying very much for advertising early on in your business now ,in the age of social media, would also be foolish. Trust your gut and don’t spend too much time over analyzing your business plan.”